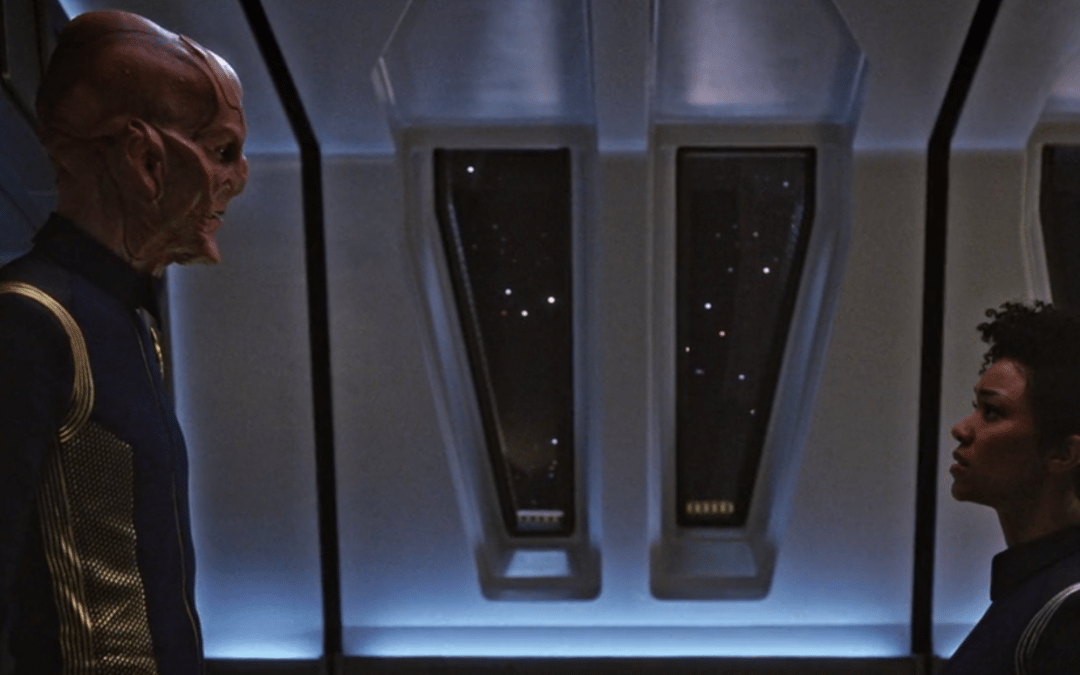 Discovery is settling into a good rhythm with ‘Choose Your Pain.’

A lot of action, as always, but with a little more character development. I noticed it for Saru especially. He’s been hard to read in the previous episodes, but we get to see more behind the mask when he’s under the stress of acting captain. And afterward, as Michael gives him Captain Georgiou’s telescope, they both become almost human. Yes, I know she’s actually human. I meant metaphorically.

Read the bold text for a quick summary of the episode!

Lorca is captured from his shuttle just a few minutes in.

Lorca is captured on the way back from a meeting with his bosses and tortured. He meets fellow prisoners Harry Mudd and Ash Tyler. A fellow Starfleet member, Ash is unbroken by months of abuse at the hands of the Klingons. This guy is clearly tougher than he looks. I was taken by surprise when he overpowers and breaks the neck of the much, much heavier Klingon warrior. So was the warrior.

Rainn Wilson makes his debut as the monologuing Klingon collaborator Harry Mudd. He attacks the whole Star Trek concept of boldly going where no man has gone before, saying he ‘understands why the Klingons pushed back.’

It’s not exactly clear what he wants instead, though. Don’t explore? Get rid of all the super cool Starfleet ships?

The Klingons were certainly keeping busy by killing each other before Starfleet showed up, but they were still the ones who started the war. Leaving them alone might have avoided the war, but they’re ready to fight anytime and they were already right on the edge of Federation space in Episode 1. And clearly they killed Michael’s parents, so they were always going to fight Starfleet sooner or later. Maybe I’m overthinking his point of view, but he’s definitely going to be back so I’m sure we’ll hear more about how much Harry hates Starfleet.

And it turns out Lorca is a guy with a lot of trauma. He reveals to Ash and Harry that he self-destructed his last command and killed his whole crew rather than let them be taken by the Klingons. It’s a little disturbing that he’s dealing so well with the trauma of killing everyone on his entire ship. The war’s only been going on for a matter of months, so this is really recent for him.

Who approved this guy for active duty as Discovery’s captain? Starfleet must have strange psychological health standards. There’s no way he’s had time to process that in a healthy way. Is this guy seeing a counselor? Even with antidepressants from the future, I think he needs a counselor.

I thought L’Rell were going to do something nasty, but as torture goes it was about as clean as it gets

His eyes were damaged by watching his last ship explode (“You choose your own pain,” he says), and sensitive to light. So the Klingons expose his injured retinas to too much light. Doesn’t seem that bad compared to what they could have done, but they were probably just warming him up for the next few weeks of torture. There’s no way Klingons haven’t perfected their torture routine to an art form.

Lorca and Ash trick Harry Mudd, kill their guards and leave Mudd behind.

L’Rell has been abusing Ash for awhile now, and he got a chance for some payback when they met during his escape. Lorca also burns L’Rell’s face with a Klingon weapon but doesn’t bother to kill her, which will undoubtedly come back to haunt him. Harry is also mad enough to cause a lot of trouble in the future. He really didn’t like being left behind, and swears revenge on Lorca. Ash and Captain Lorca make their way to a Klingon fighter and fly away from the battle cruiser, pursued by the Klingons.

Michael decides Ripper the tardigrade is sentient early in the episode and tells everyone so. (By the way, a tardigrade is also known as a moss piglet, water bear, or space bear. Just a fun fact.)

Despite Michael’s Vulcan upbringing, she’s definitely the most compassionate of the main characters. She’s so empathetic she has a dream where she’s the one being used for a guidance system, not Ripper.

I was pretty surprised that Saru was unaffected by learning the tardigrade might be sentient. This is not the type of Star Trek I’m used to, where the ‘Prime Directive’ is always in play. He just wanted his Captain back, and was completely willing to kill Ripper if it came to that. But he allows her to help the poor creature at the end. Michael and Tilly free Ripper by ejecting it into space after sprinkling it with spores. Apparently this is what it needed, because it immediately uncurls and teleports away.

A happy ending for the giant sad water bear.

Stamets becomes one with his beloved mushrooms.

To save Ripper from possible death (and pain), Stamets injects himself with the tardigrade’s DNA to communicate with the spores and travel their network. This guy loves mushrooms a weird amount, and he’s definitely going to take any opportunity to get closer to his obsession.

He becomes part moss piglet right before Captain Lorca beams back to the ship and completes his escape. This puts him in communication with the spores, and makes the Discovery’s spore drive operational again.

The good news is this puts the Discovery back in business. The bad news is he seems to have opened up some interdimensional gateway to an evil entity which may be possessing him…

You win some, you lose some.

Actually, let me tally it up: Share DNA with a tardigrade and open portal to a sub-spatial monster who lingers ominously in mirrors… Nope, lose-lose. No doubt this type of mirror monster is exactly why Starfleet forbids genetic experimentation! Silly Stamets. Spores are for space bears.

See our other Star Trek: Discovery recaps and posts here