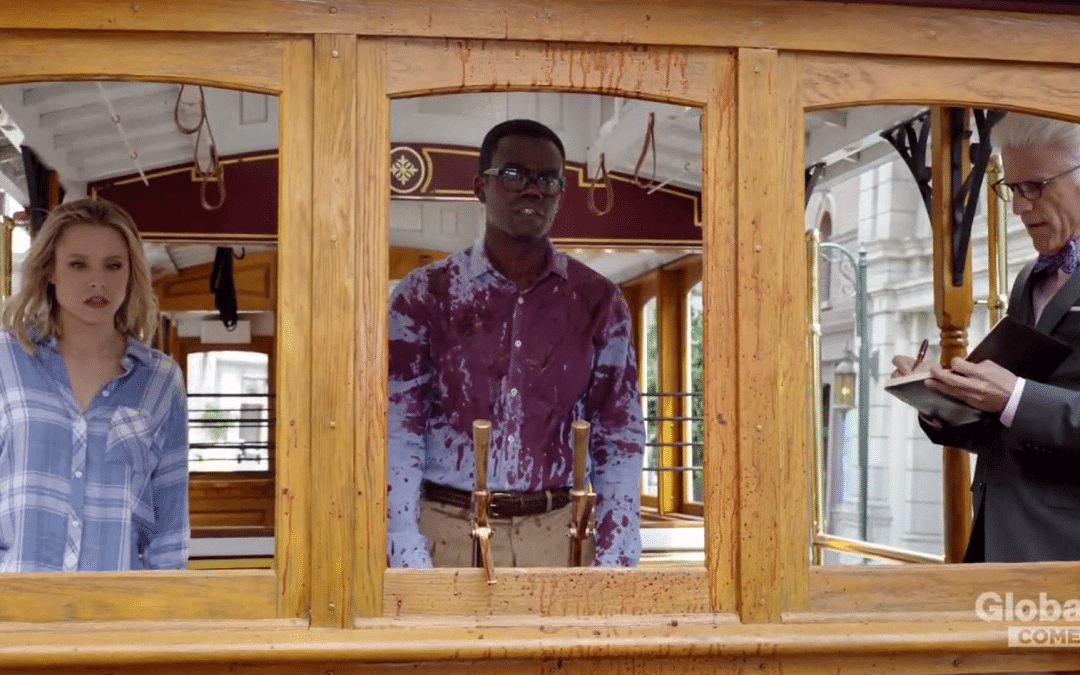 The episode begins on Eleanor’s little house, with Chidi lecturing in his usual tiresome fashion. He brings up a thought experiment called the “Trolley Problem.”

It involves you driving a trolley and a choice between two tracks. On one track are five people. On the other is one person. There’s no way to slow down in time to not hit either, so you’ll either kill one or five people. You can’t save everyone. Chidi asks, “What do you do?”

Eleanor wishes to know if any of the people involved are an ex-boyfriend. Chidi is barely even annoyed by this type of question by now, and simply brushes it off. He’s actually quite patient for someone in the Bad Place. Eleanor picks the easy choice: kill one person.

Michael displays his notepad for the class, showing a horrifying cartoon depicting all six people on both tracks coming apart like poorly made action figures, as he runs down the five people and sticks some sort of blade out the window to decapitate the sixth person. He gets reproving stares from his classmates.

When the others have left (Michael to another room, Jason and Tahani to enjoy their new relationship), Eleanor comforts Chidi, saying that asking Michael to not be bad is as impossible as asking her to not be attractive.

“How would you even do it? You’d have me hunch, or something? And stand there and say, grrrrp, grrrrp, grrrrp… I don’t even know! I can’t even picture it!”

Chidi seems to have written almost a hundred pages of a rap about ethics. In death as in life, he can’t stop writing material that no one wants to read or hear. He’s the most tragic of the characters, in my opinion.

Janet agrees to be Tahani’s therapist, though she “only contains all the knowledge of the universe” and not the ability to “process complex human emotions.” But Janet as always is eager to please and is an easy pushover for Tahani’s insecurities about her new relationship with Jason.

Therapist Janet is the same as regular Janet, but with glasses and a notepad.

As a demon (though he considers the term demon ‘more than a little racist’) Michael struggles with the idea of people being good. He knows a little too much. Chidi asks him about his homework on Les Miserables. Not only does Michael believe everyone in the story belongs in the Bad Place (including “the whiny prostitutes”), he cites his direct experience with Les Miserables’ author Victor Hugo, who is “a huge” wimp, apparently because of his fear of lava monsters.

Hey, maybe it is silly to be scared of the lava monsters. We’ve seen them a couple of times, and each time they’ve been quite friendly, at least to their fellow demons.

I think this is one of the show’s funniest jokes: pulling out the points-based merit system and assigning people in an apparently arbitrary way to either the Good Place or the Bad Place. Michael claims that stealing a baguette is worse than stealing a loaf of bread because “it makes you more French.” Clearly, racism only bothers Michael when he believes it’s directed his way.

Jason walks in on Janet and Tahani’s therapy session and has no idea what’s happening but thinks it’s very cool. Tahani realizes she’s bulldozing Jason and gives him the opportunity to share his feelings.

Back at Eleanor’s house, Michael and Eleanor are finally on the same page on teaming up against Chidi’s vagueness. Michael smiles evilly when Chidi shows some pride and claims to know more than he does about ethics. Michael snaps his fingers and suddenly they’re actually on a trolley heading for five people.

Eleanor, predictably, is unfazed, but Chidi is at the controls and panics. As is typical for him, he wallows in his indecision until it’s too late to turn and the trolley kills the five people on the first track. Chidi is showered in fake blood, but Michael assures him they aren’t real people; it’s all a simulation.

“Well, that’s good, because some of the fake people got in my mouth!”

The second time Chidi saves the five people but ends up killing “an almost impossibly lifelike” simulation of his best friend from season 1 (remember the guy with the cowboy boots?).

Back at the ranch, Jason is comparing Tahani to “a bunch of water balloons” and complains she never calls him pretty. He believes Tahani is embarrassed he’s “not some sort of scientist who forecloses on banks.”

Tahani asks for couples therapy from Janet, whose cheerful thumbs-up response results in her thumb inflating, popping off, and floating away. Despite their abuse of Janet as a therapist giving her glitches, she’s still ready to go.

“What has one thumb and wants to keep going? This not-lady!”

Meanwhile, Michael is forcing Chidi to kill either Santa Claus or five William Shakespeares (he killed the Shakespeares, not what I would’ve guessed). Then he tries to get Chidi to slice up Eleanor and use her as an organ donor to save five dying patients who are victims of “a bad man” who ran them over with a trolley.

Chidi refuses and Eleanor is visibly relieved, but Michael confronts him with the patients’ families. At this point, Michael is clearly just torturing Chidi, and Eleanor catches on.

Michael admits it and bursts into high-pitched giggles, but Chidi isn’t amused. Michael was supposed to help the group avoid torture, but he’s still torturing them. Chidi kicks Michael “the fork out of my class!” Eleanor tries to cheer Chidi up in the aftermath as he sits, staring at a table of contents for an hour through glasses, as he puts it, “smudged by sweaty forehead grease.” Eleanor didn’t mind people being run over and violently killed, but she thinks sweat is gross.

Tahani and Jason reach an agreement. Though Jason says, “I’m nice to you and you’re mean to me. There’s something wrong about that, but I can’t put my finger on what it is,” he doesn’t hold a grudge at all.

Jason is certainly the nicest of the group. Tahani promises to be better, which is a real breakthrough for her. She is in the Bad Place because she believed she was awesome and did everything perfectly, so she’s making some significant progress in this episode. They kiss and Janet spits a live frog into her hands.

If you remember, Janet is an authentic Good Place Janet that Michael stole to make his fake Good Place more realistic. She isn’t meant to be dealing with bad people and their problems, nor is she designed to fulfill the requests of demons which end up making the real humans unhappy. It makes sense she’s malfunctioning.

Eleanor goes to counsel Michael. This episode shows more than ever the similarities between Eleanor and the demon. Even Eleanor notices. The difference is while she enjoys causing people pain the same way Michael does, she (sometimes) resists the urge to laugh about it.

Then again, she sometimes does. She accuses Michael of “pulling an Eleanor.” Michael responds, “Posting my cousin’s credit card number on reddit because she said I looked tired?” And they both cackle evilly for a few seconds. Eleanor says, “Forgot I did that.”

But Michael takes her advice that he has to put some effort into making it up to Chidi. He shows up with things that will make each of them happy, a concept he believes he invented. “I call them, ‘opposite tortures.’” Eleanor: “Do you mean presents?” Yes. Yes he did.

Tahani gets a giant diamond. Eleanor gets a “never-ending shrimp dispensary,” and her voice becomes hoarse and she almost cries.

“This is the dream!”

Jason gets a Pikachu balloon he immediately pops by accident. And Chidi gets a replica of a lost notebook written by Emmanuel Kant, which he throws in the trash. He wants a real apology, not a bribe. Michael sarcastically apologizes, then actually apologizes. Chidi accepts him back into the group.

Meanwhile at the shrimp dispensary:

“Nobody try Mystery Flavor! It’s white chocolate, and it is nasty!”

Fast forwarding a month, we see Tahani and Jason thanking Janet for her continued and apparently successful couples therapy. Instantly the entire neighborhood has an earthquake and Janet disappears only to reappear in Michael’s office.

Janet: “I am wrong. I can’t stop glitching, I don’t know why, and it’s getting worse. I fear this neighborhood is in danger of total collapse. [short pause] So that’s the main thing! How are you?”