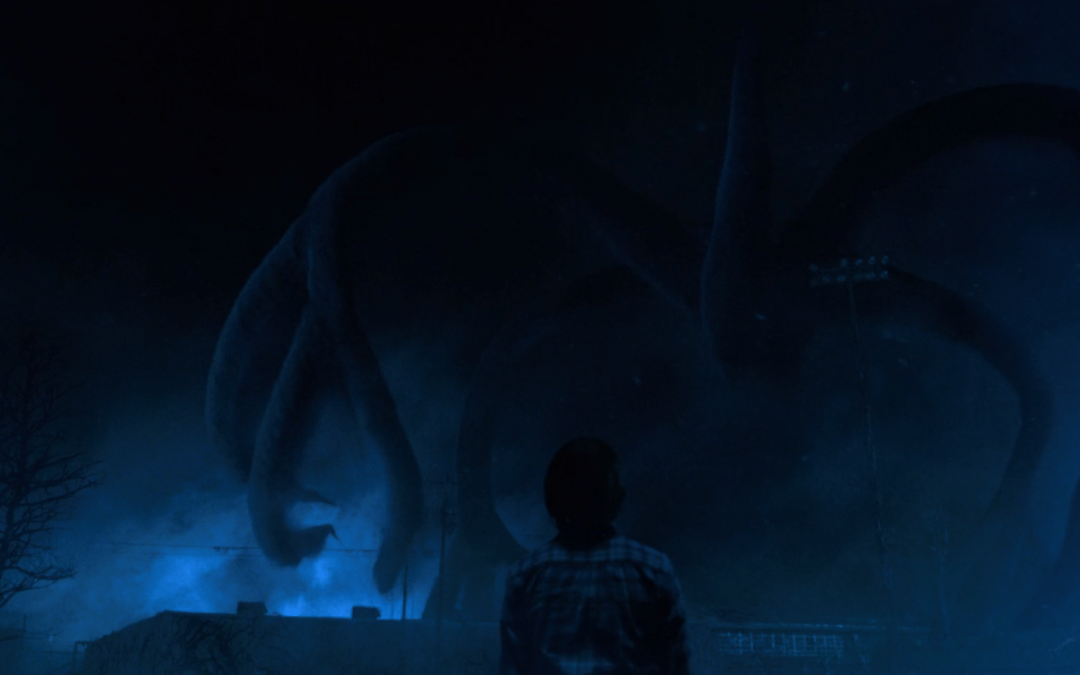 In the last episode, Dustin discovered something strange in his garbage can.

This chapter begins with revealing Dustin’s discovery: a strange creature with two legs and a muscular tail that looks like a giant pollywog.

The disgusting creature both looks and sounds unearthly, and there’s no question that it must be from the Upside Down. Dustin, however, doesn’t make that connection. He feeds it a candy bar Three Musketeers and names it d’Artagnan. Dart for short.

Dart is slimy, ugly, and hates light and heat. The only thing that keeps him from being overtly a monster is his small size. But Dustin, for some reason, loves the nasty little creature.

Eleven and Hopper are still on the outs. He tries to patch things over, but El becoming more frustrated with her de facto imprisonment. Hopper says she’ll get out soon, but won’t say when. She yells at him, and he yells at her as she sprays him with a psychically-propelled breakfast. El is not intimidated in the slightest and gets the last word: “Friends don’t lie.”

Bob gives Will some advice on dealing with his “nightmares.” What Bob doesn’t know is that Will isn’t having flashbacks or nightmares. He’s having visions or being partly transported to the Upside Down. Bob tells Will that he conquered his own bad dreams by confronting them. I’m not sure this will work so well with Will’s giant evil smoke monster.

El remembers coming to the cabin almost a year ago with Hopper after meeting him in the woods. It was Hopper’s grandfather’s cabin and has been abandoned for a long time. Hopper puts on music, and El is startled by the music and Hopper’s dancing. Eleven is a good straight man to Hopper’s dry humor.

But El in the present is very dissatisfied. Hopper set three rules: keep the curtains closed, don’t open the door unless Hopper knocked, and don’t go outside alone. She breaks all three and walks away. El is back with a vengeance. She walks around in the woods and meets a mother and child before finding her way to Mike’s school.

Dustin shows Dart to the others, including Max. They are interested but not nearly as fascinated by Dart as Dustin is, and Will gets an actual flashback (not a vision) to the end of last season. As I’m sure you remember (it’s hard to forget) Will vomited a small creature into the sink. It’s clear he believes Dart is this creature.

Bob has a lunch date with Joyce, and tells her he saw some kids bullying Will on the video camera the group took along for trick-or-treating last episode.Joyce is mad. When she gets home she checks the tape and finds a blurry image of the shadow monster from Will’s drawing superimposed on the film. Now she knows Will’s visions or travels to the Upside Down aren’t flashbacks. They’re real. She heads to school to find Will.

Hopper draws concentric circles connecting all the farms that had the Upside Down rottenness attack their plants. He sees the center of the circles is the lab where the breach to the other side is used by the government. Hopper confronts the Will’s doctor and demands he test the plants and keep the town from becoming more infected. Hopper is willing to cooperate with the government (and use his cooperation to shield El), but only if it doesn’t threaten his town.

Nancy and Jonathan are getting closer to a relationship, maybe? There’s very little to say there. They cooperate to tell Barbara’s parents that their daughter is dead, but the entire town’s phone lines are tapped and they are overheard.

Mike, Will, Dustin and Lucas start arguing about Dart as Max waits outside. Mike believes Dart might need to be killed because it’s from the Upside Down. Dustin says it doesn’t mean he’s a monster, but Dart seems to contradict this by growing larger, sprouting two legs and running after Mike tries to smash it with a hammer. The group splits up to find Dart.

El finds Max trying to impress Mike, and even though it wasn’t working El gets jealous and yanks Max’s skateboard out from under her. Mike immediately realizes it was El’s powers at work and runs to the door, but he’s too late. She’s gone again.

Will finds Dart but it triggers another trip to the Upside Down. The smoke monster is right on Will’s heels the instant he makes the switch, and Will flees the school, alone.

Dustin finds Dart and hides it. He won’t risk the group harming the disturbing creature.

We see Will again, still running and quite a distance from the school. He pauses as he recalls Bob’s advice to stand his ground and face his fear. The monster rises up to skyscraper heights and pounces on him as he screams, “Go away!” The monster’s smoky limb makes contact with him, and forces itself into Will’s mouth, nose and eyes.

This was pretty horrifying and a really good cliffhanger. I don’t know how I could see this without immediately watching the next episode, but I’m not going to try. On to Chapter 4: Will the Wise!