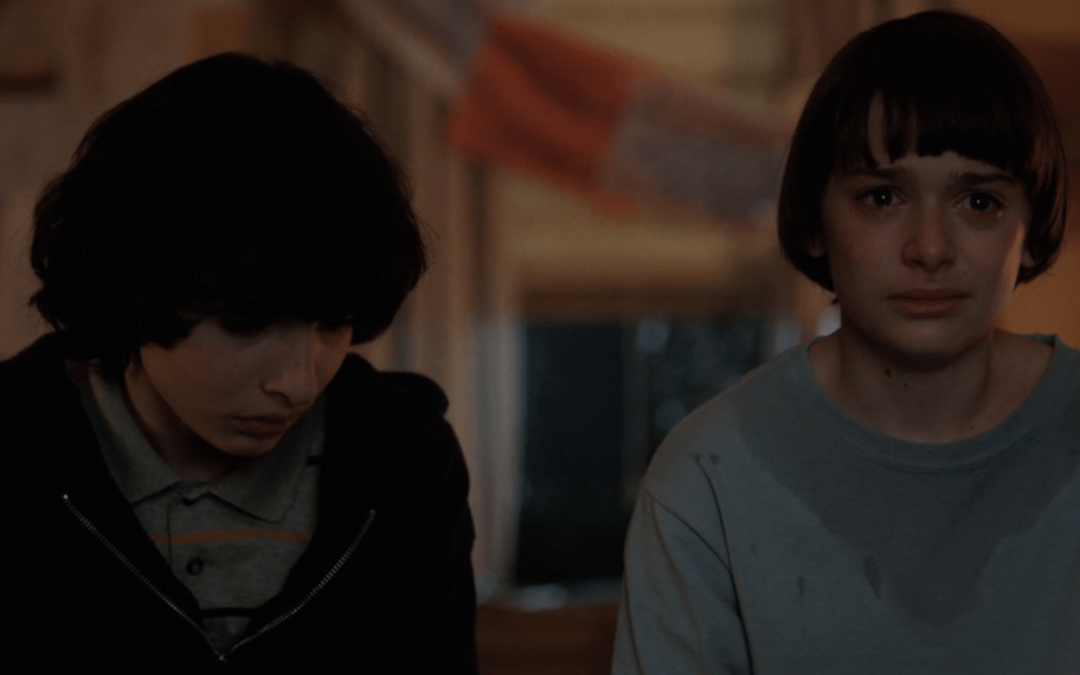 In this chapter “Dig Dug,” things keep ramping up! The stakes keep rising every episode.

Joyce has taped the hundreds of pages Will has drawn together into a map covering walls, floor, and ceiling. Will tells Mike what it’s like to be connected to the shadow monster, which exists not just in the Upside Down, but also in their town of Hawkins. Will feels what the shadow monster feels, and the more it encroaches on our reality the more he feels it.

Mike gives Will some much needed moral support. He encourages him by pointing out that since Will has intelligence on the enemy, it should be easier to defeat. Will seems perpetually stuck in between dimensions, and it’s taking a heavy toll. Honestly, this kid should be completely insane by now. He’s been undergoing mental torture for a year, and it’s not getting better. But he’s keeping it together shockingly well.

Hopper foolishly jumped into the Upside Down tunnel in the last episode, with no way to climb out and no way of knowing what was inside. He wanders the tunnels until some growths on the wall erupt in his face. He coughs and passes out on the floor. Bad move going into the tunnel, Hopper. The ceiling grows over and he’s left with no idea of where the exit is.

Nancy and Jonathan check into a motel. This is probably part of their master plan which began with recording Dr. Owens. They reminisce about last year when they drove away the Demogorgon but Nancy goes to sleep offended.

Dustin is playing it very cool in the wake of his cat being massacred by the baby Demogorgon. He decoys his mother away and armors himself with catcher’s gear and a hockey stick. He lays a trail of sliced meat into his family’s Cold War fallout bunker.

The Demogorgon smells him, however, and goes after him instead. Dustin hits the Demogorgon perfectly with his hockey stick, launching it into the air where it rebounds into the bunker. He locks it inside just in time.

Dustin is frantic, calling for Lucas or Mike or Will, but none respond. Dustin is left chasing around the neighborhood trying to find his friends, anyone, to help him. He runs into Steve and commandeers him.

Lucas is busy telling Max everything about last year. But he fails to convince her, though he almost makes it happen with his earnestness. She leaves, uncertain of what’s real.

Eleven has hitchhiked to where her mother is being cared for. She meets her but is not recognized. She is suffering from an unknown and severe mental illness. Becky Ives, Terry’s sister, is taking care of Terry. Becky says she seems stuck in a dream. At least Becky completely believes that El is Terry’s daughter. That’s a nice break for El, who doesn’t get too many breaks.

El follows lights in the house that flicker in sequence, discovering that her mother has powers like her. Eleven connects to her mother psychically and sees her mother’s memory of her birth. El also sees her kill a security guard trying to get her daughter back. She is then electroshocked into reliving the same memories over and over indefinitely.

Nancy and Jonathan go to visit Hawkins’ resident conspiracy theorist, Murray Bauman. He has a lot of theories about what happened, but they tell him the truth. He isn’t even a little taken aback and believes them completely. He helps them think of a way to use the tape to put the lab out of commission.

Rather than reveal the whole truth, he suggests they leak a more palatable version of it. Instead of saying they’ve broken through to another dimension which is infecting our world, spread the idea that toxic chemicals or radiation killed Barbara.

Will sees Hopper in danger, and draws where he is but no one can figure out how Will’s map connects to the real world. Joyce invites Bob to take a look at the insane jungle of drawings that she has papered her house with, telling him it’s a game. He doesn’t really believe it, but gets caught up in figuring it out anyway.

Hopper figures out that the Upside Down hates flame and makes a torch. He tries to dig his way out and fails. The vines grow over him, pinning him to the floor and covering his body. Will , Bob, Joyce and Mike drive out to Hopper’s approximate location, but can’t find him until Will has what he calls a ‘now-memory’ of Hopper’s location.

Bob and Joyce descend into the tunnel and rescue Hopper from where he is being slowly choked to death by the vines.

He is rescued just as the government agents arrive on the scene, flamethrowers at the ready. As they begin to burn the tunnel, Will is struck with crippling pain and falls. The chapter ends with him twitching on the ground in some kind of seizure, surrounded by agents.

Will’s life just keeps getting worse and worse. Now he’s in horrible physical, emotional and mental pain. This season is a lot more intense than the last one.