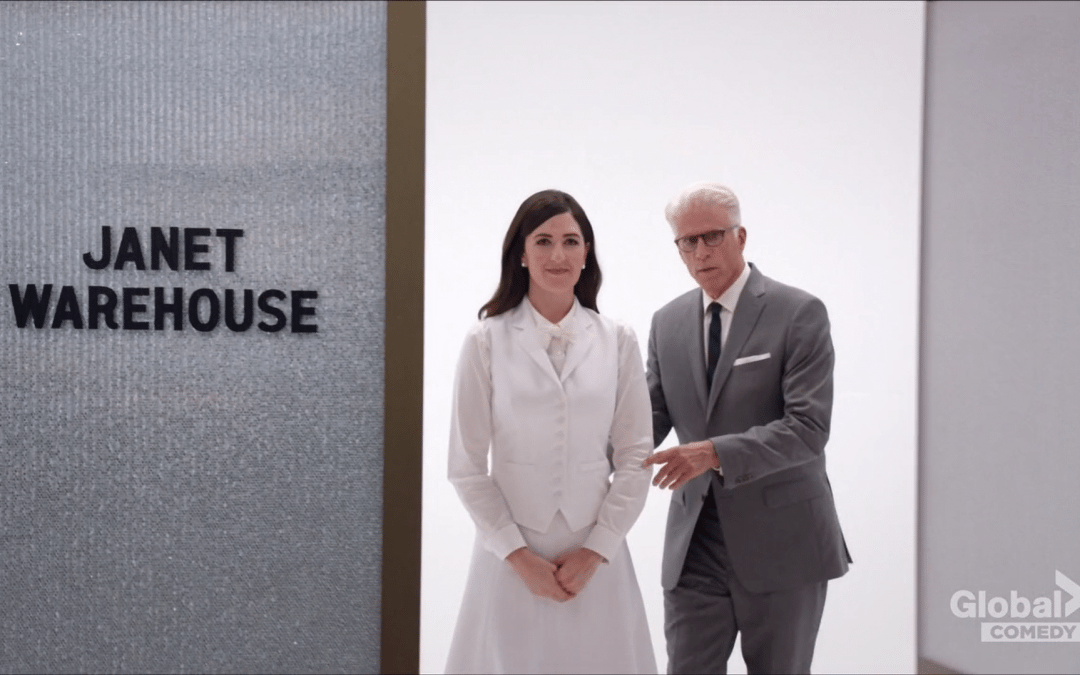 The title promises to go much more in-depth into the characters of Michael and Janet, and it does, in a big way.

The other characters barely make an appearance at all, but the show is so well written you won’t miss them. 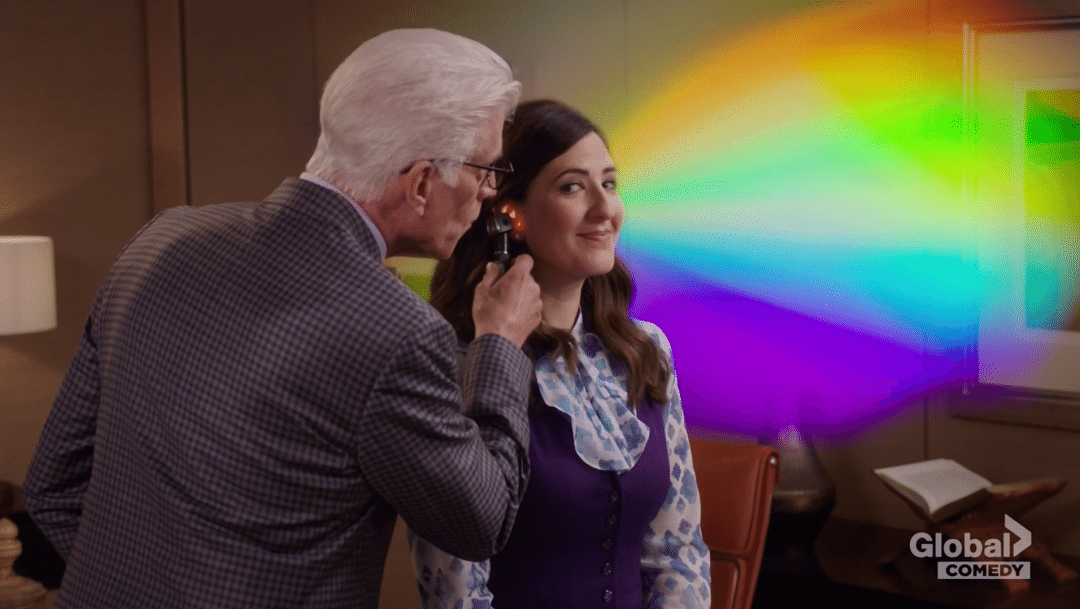 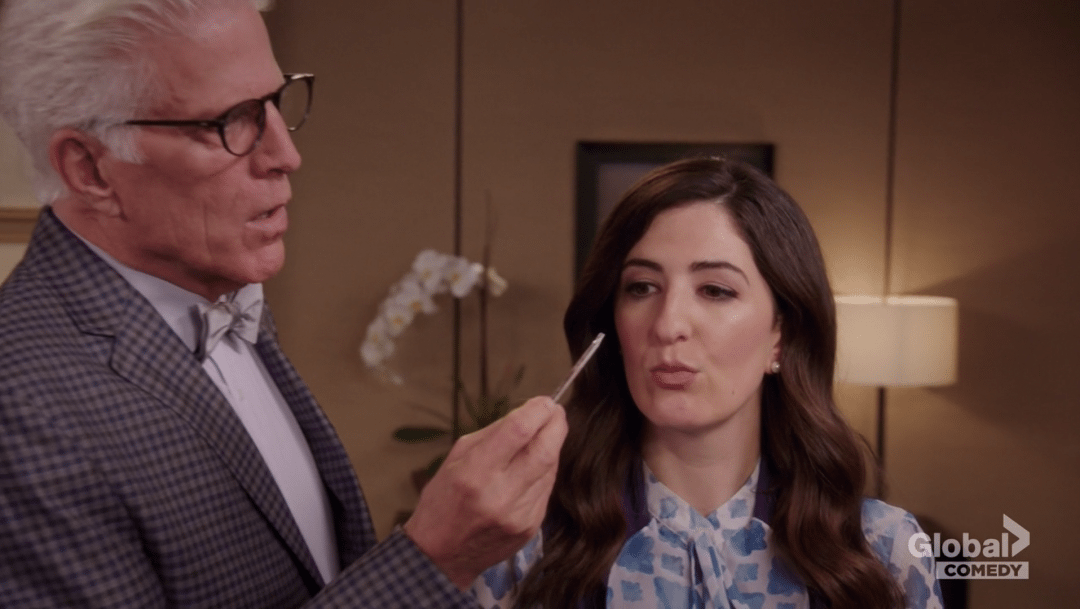 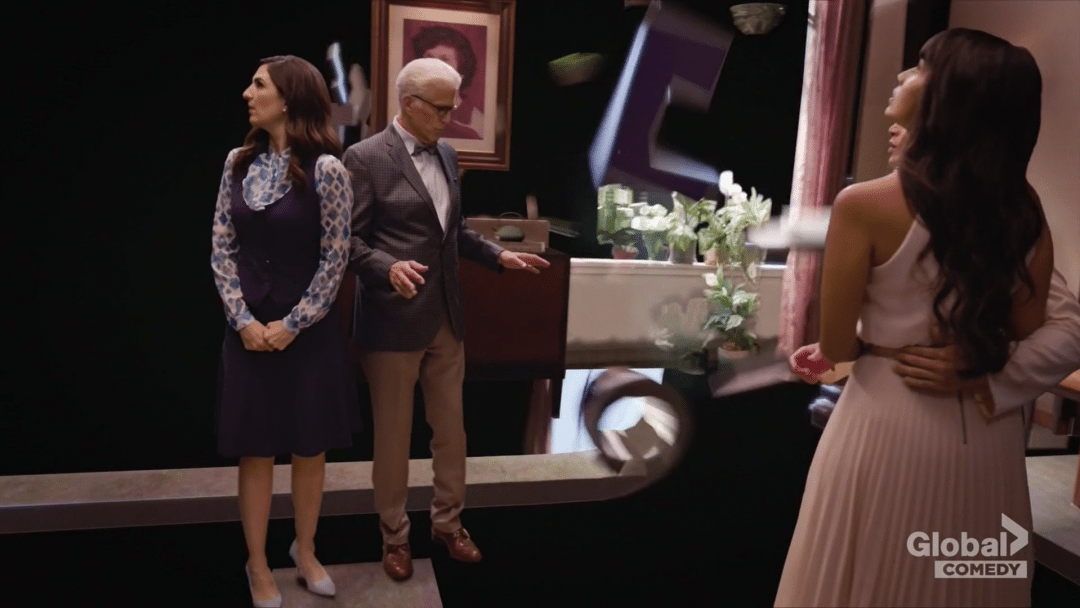 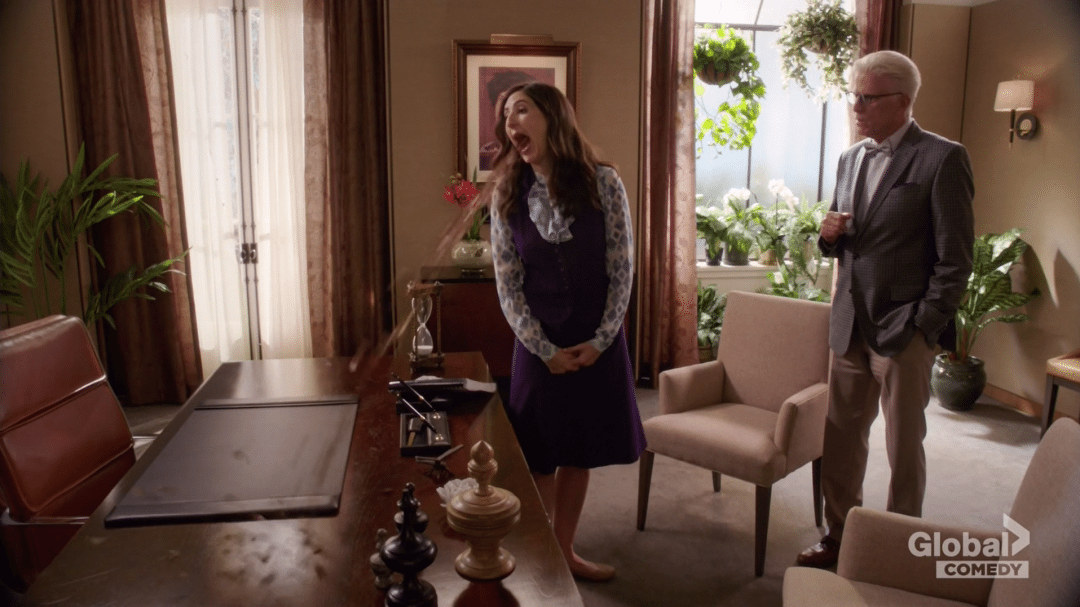 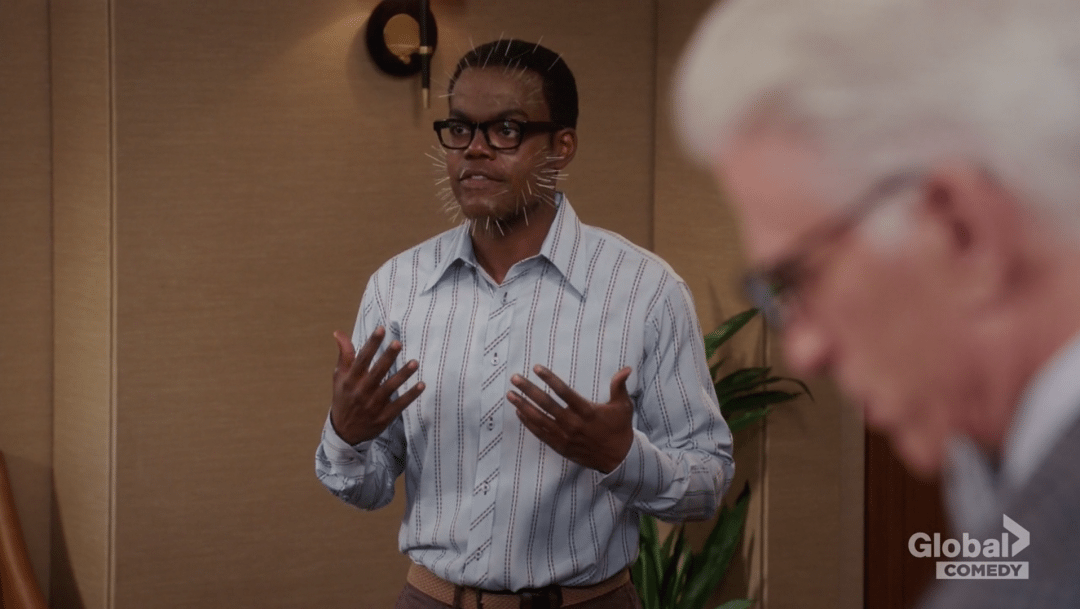 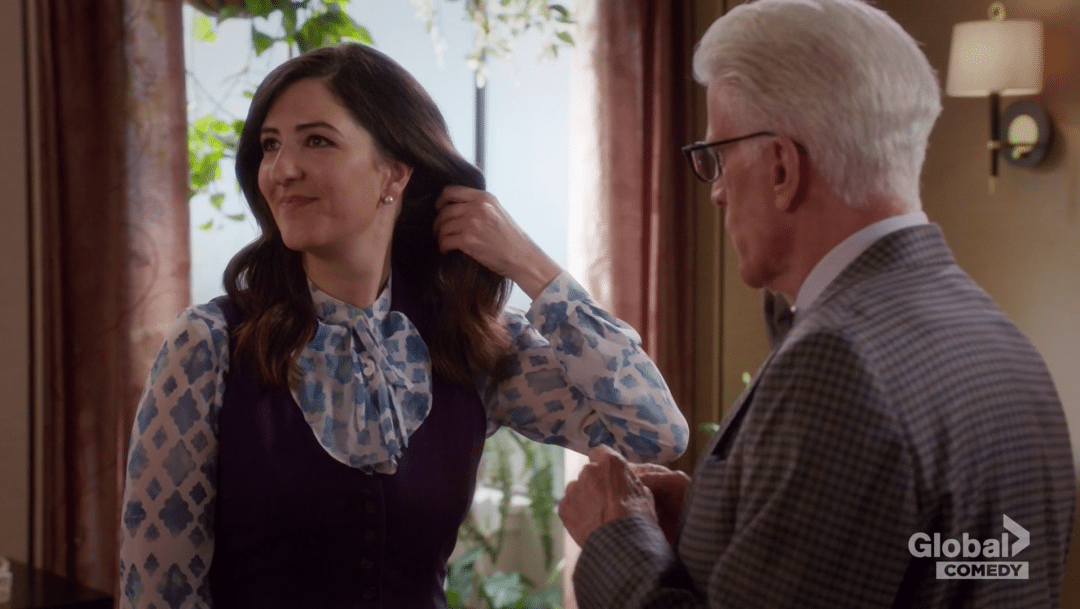 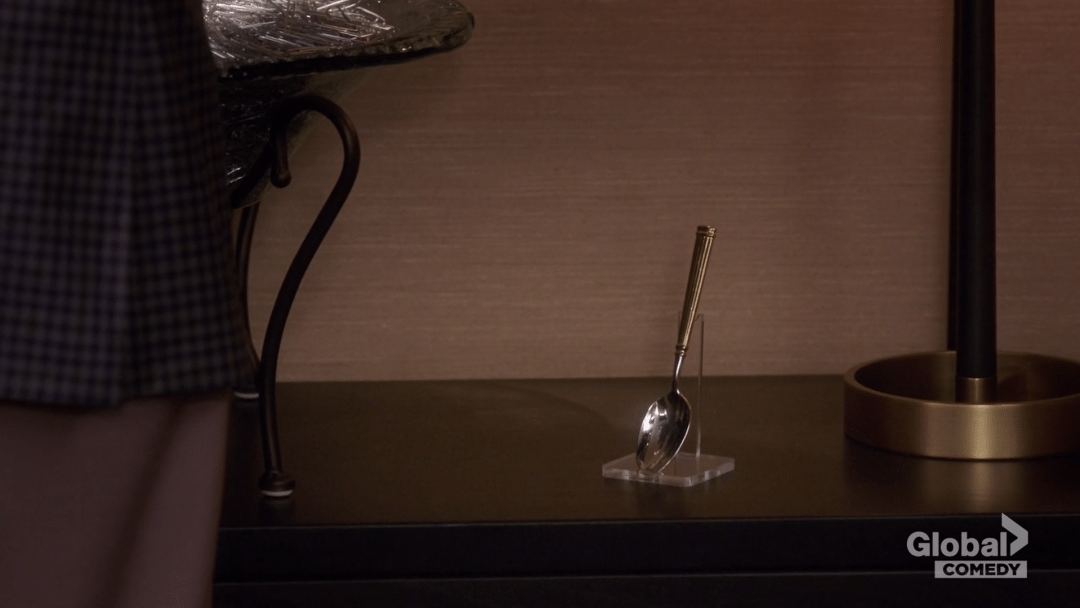 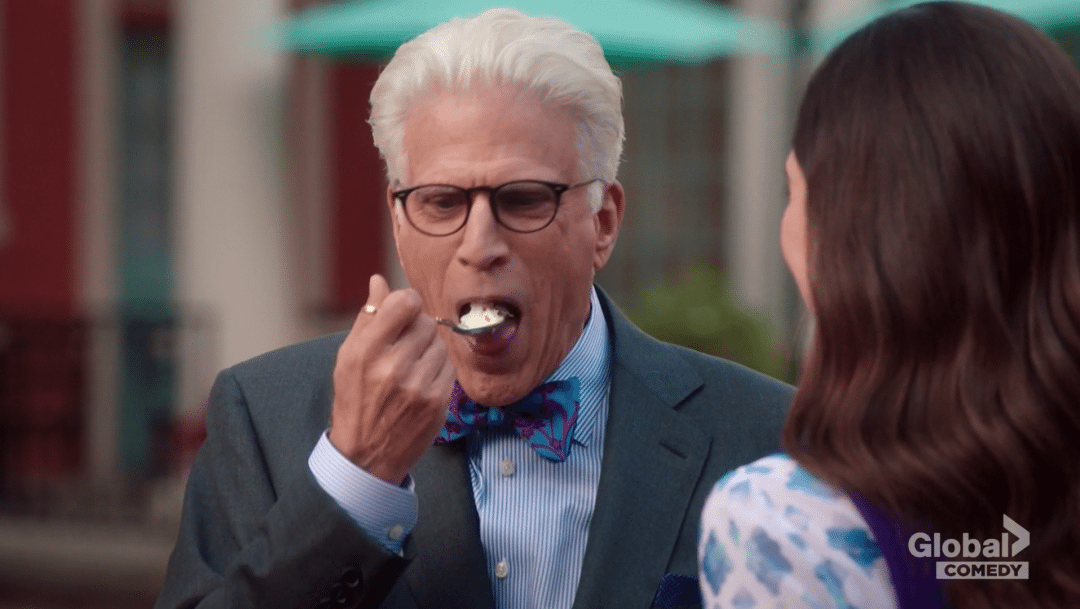 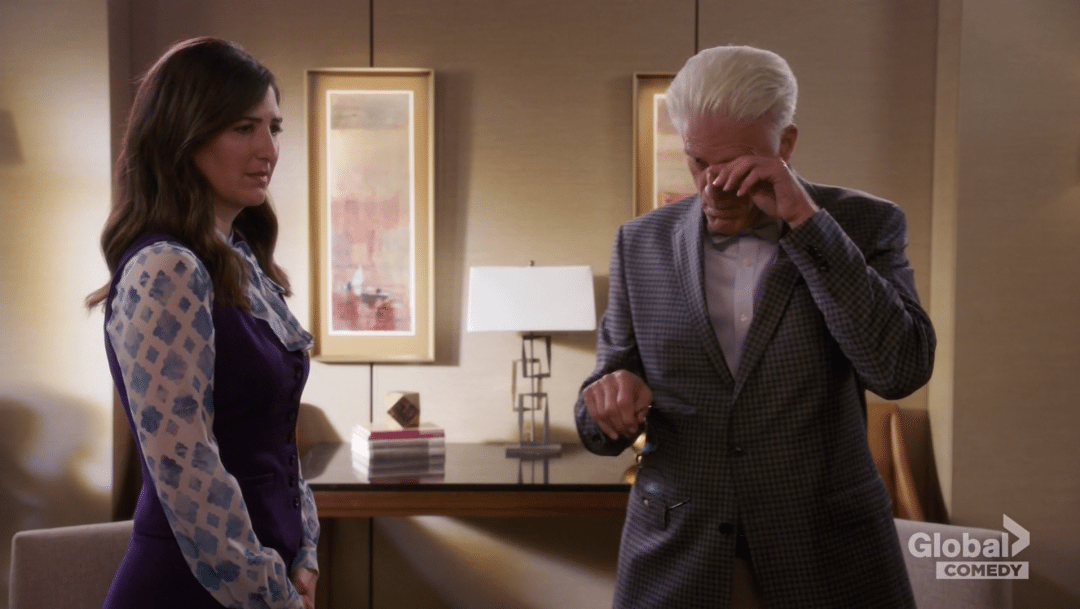 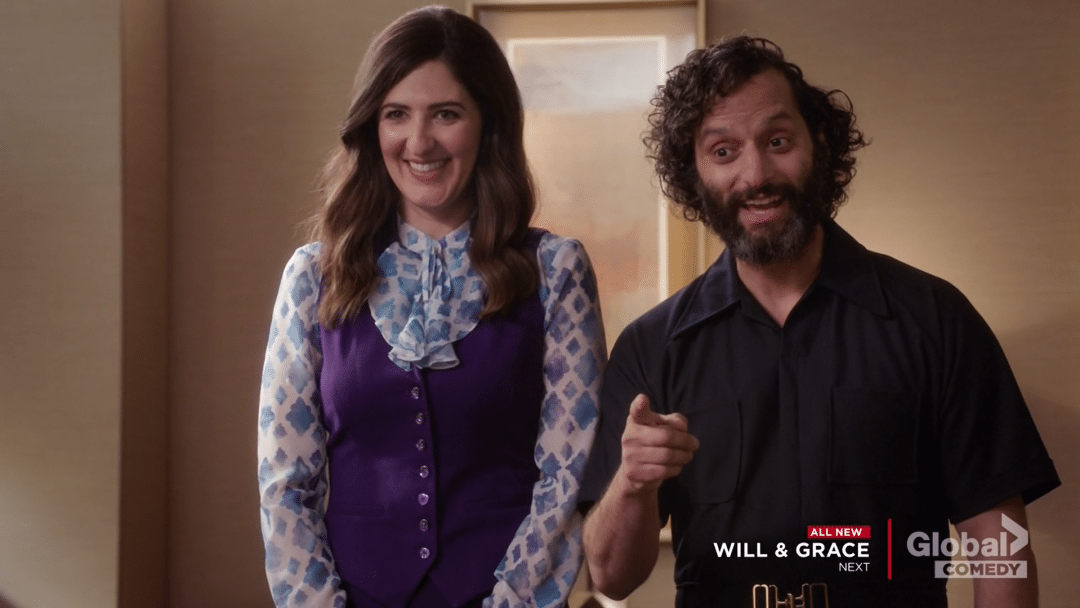 The episode begins in the past, with Michael entering a blindingly white room containing a blissfully smiling Janet. It’s the scene where he steals the Janet we know and love from the Janet Warehouse. The other demons are dumbfounded by the ease of the theft and are shocked that Michael didn’t even need to “choke out an angel.”

We also get our first look at a Bad Place Janet, and it’s not pretty. Michael asks her to recommend a tasty ice cream place in town. After trying to pretend to be nice for about ten seconds, the Bad Place Janet (who is rude even to her demon masters), her face glows and her entire head melts into her torso and disappears. It’s clear why Michael needed an authentic Good Place Janet to lend some truth to his facade. A Bad Place Janet would have broken the illusion immediately.

Jumping back into the present, we pick up where the last episode left off: Janet in Michael’s office. She informs him with a laugh of the “fun fact” that the neighborhood “is equally likely to im- or explode.” In order to solve the glitches in the neighborhood, Janet uses both hands to pull her user manual out of her nose.

Vicky comes in to demand an explanation for the earthquakes, asking him what went wrong. Michael is relieved when Janet lies easily and convincingly about the source of her glitches. Michael puts Vicky off by encouraging her to torture Chidi with her brilliant new idea: needles. That’s the whole idea. She walks away happy and Michael gets back to diagnosing Janet.

Janet gets a checkup

Michael runs a series of ridiculous tests: He shines a light in her ear and watches the rainbow that pops out the other side. When testing her temperature, he finds it’s “a little high, but okay” at 99.7 trillion degrees. He checks her blood pressure and is relieved to find she still has no blood. Michael keeps reading and believes he figured out the problem: Janet is not compatible with lies.

In another flashback, we see Michael activate Janet for the first time. He asks her about creating a neighborhood that’s “a little different” than what she’s used to and of course, pretends to be an angel rather than a demon. Back in the present, he apologetically tells Janet he lied “a billion more times” which, knowing him, could actually be true. Janet tells him no: if being lied to was the problem, she would have been glitching from the start.

Tahani and Jason walk in, the true source of Janet’s malfunction. Jason asks for Janet’s help in getting Tahani a gift, and Janet happily promises to do so when she’s fixed. As soon as she does, the room deconstructs and slides away piece by piece, leaving them in an indeterminate black void. Jason is the first to react: “We got robbed!”

The room constructs itself again after a moment. Michael hurries them out and comes back in, shutting the door and trying to figure out what happened. He’s baffled by the “crazy” revelation of Jason and Tahani’s new relationship. Janet says, “I’m so happy for them,” and immediately spews hundreds of coins onto Michael’s desk and into Michael’s jacket while she hums “Aaaaaaaaaaaahhhhhhhhhh.”

Michael looks at her and shakes the coins out of his jacket contemplatively. He says, “Janet, tell me a lie.” Janet claims she cannot lie, but Michael points out she lied to Vicky earlier. Janet is delighted (as she is by almost everything) to discover her newfound ability to lie, and exercises her newfound ability by telling Michael ”I love your outfit.”

Simultaneously, a six-foot-long sub falls onto Michael’s desk, spraying lettuce all over it. Michael inspects the user manual and realizes that the problem is Janet lying. Michael figures out that she is unintentionally telling lies when she helps Jason and Tahani, because she is still in love with Jason. We actually see poor Janet lose her bland smile and become dissatisfied.

She requests Michael “kill her.” Not reboot; kill. The manual instructs the user to hold down Janet’s nose and insert a paperclip into the small hole behind her left ear. This will initiate her self-destruct mode, causing her to fold in on herself until she becomes (in her words) “a lifeless marble,” which can either be a), shot into space, or b), eaten as a high potassium snack.

Chidi makes an entrance stage left. He walks in calmly, but there’s something odd about his face. As the camera cuts to a closer shot, we see his entire face impaled by needles. He asks very nicely if there are any other tortures planned for him but Michael pushes him out distractedly and tells him to “walk it off.” Chidi says, “I would love to walk it off, but my feet have needles in them.” Michael shuts the door.

Janet begins chanting, “Kill me, kill me, kill me!” enthusiastically. Michael reluctantly takes a single paperclip from a bowl of thousands of them. His gaze is arrested by a spoon carefully set on a stand and he has a flashback to when the neighborhood was about to open for business. The first time, not for any of the hundreds of reboots Michael did later.

In the flashback, Michael has a slight nervous breakdown about the trickiness of creating his perfectly imperfect neighborhood, but is reassured by the ever-helpful Janet. She helps him come up with the idea to make all the frozen yogurt places in the neighborhood. The spoon is from his first taste of frozen yogurt, which was actually Janet’s idea. She did not realize she was helping his diabolical plan and was simply trying to be helpful. She’s so eager to oblige, it’s believable the whole neighborhood could have been constructed without her understanding she was being used for evil.

Back in the present, Michael can’t go through with the plan of killing Janet. He claims he won’t do it because it’s too dangerous. Janet tells him definitively that it is safer to kill her. He prevaricates, saying he and the humans will never escape without her help. Janet points out the new Janet he obtains after killing her will help them as well. He mumbles and again says it’s too dangerous. Janet is puzzled by his illogical behavior.

Michael admits that he can’t kill her because she’s his oldest, truest, most loyal friend. Yes, he actually said that! He’s embarrassed by the confession but he still won’t kill her. He proposes since they have a very human, emotional-type problem, that they consult a problematic, emotional human.

Eleanor to the rescue! Not so much

The next thing we see is Eleanor with her mouth wide open, sitting with Janet. Eleanor dispenses her wise advice: get drunk and find a rebound boyfriend. She suggests Michael, but even she realizes what a terrible idea that is.

Janet goes back to Michael and reports Eleanor’s command to, “Go get it, girl.” She and Michael don’t know what to get, so Janet says “We’ll get everything, just to be safe.” Michael approves. Janet points out that if she’s careful what she says around Tahani and Jason, the glitches should end. Janet goes to her “void” for awhile to be alone. But awhile for Janet is only several seconds, and Michael is still adjusting his chair when she returns… with a strange man. Janet informs Michael that this is her new boyfriend. And she made him. His name is Derek.

Derek rushes around the room good-humoredly, shaking hands with the various hanging plants in Michael’s office and being fascinated by the mirror. Michael is flabbergasted. “You can’t make a person!”

Janet says happily, “I know. But I did though.”

Read our other The Good Place episode recaps here


Warning: A non-numeric value encountered in /home/customer/www/dayofthehuman.com/public_html/wp-includes/media.php on line 457