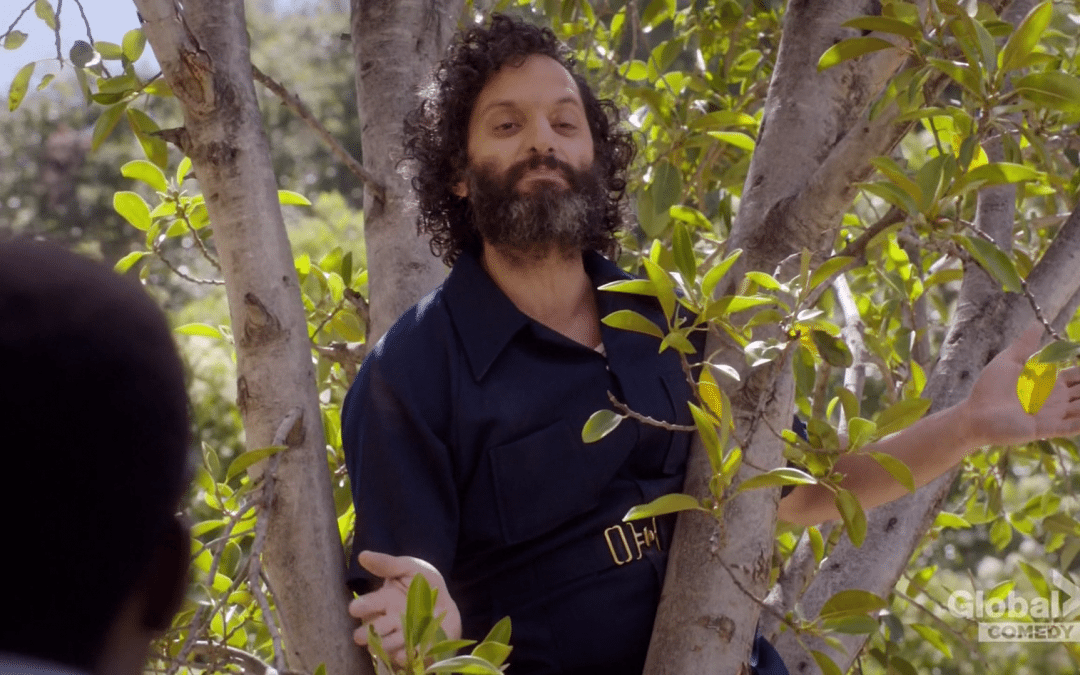 In this episode, we see a lot of the newest addition to the afterlife: Janet’s titular boyfriend ‘Derek.’

He pops out of Michael’s office and back into the void from whence he came, as we saw in the last episode, “Janet and Michael.” 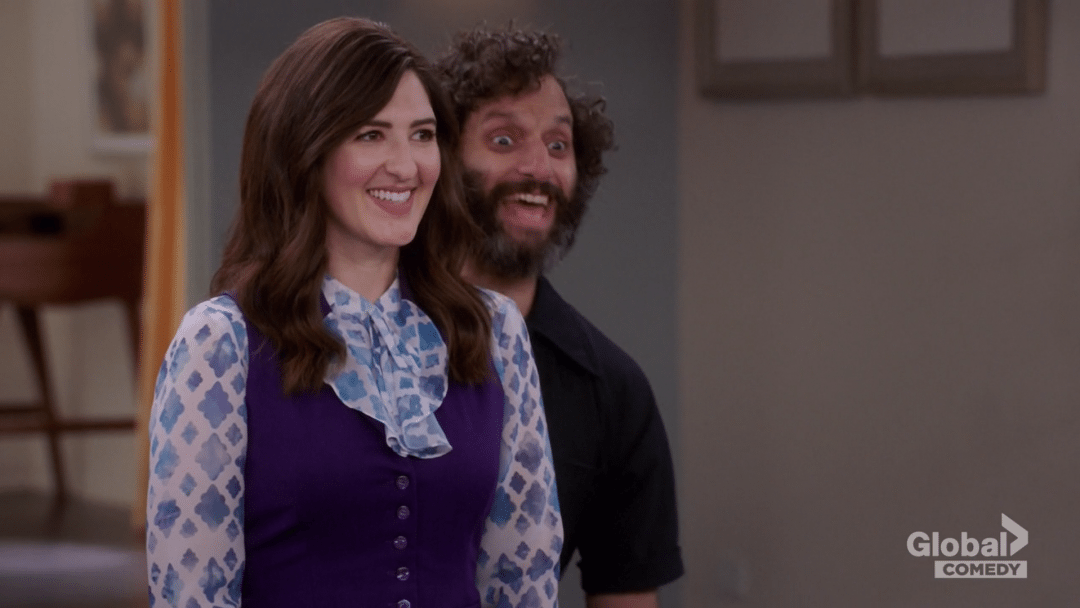 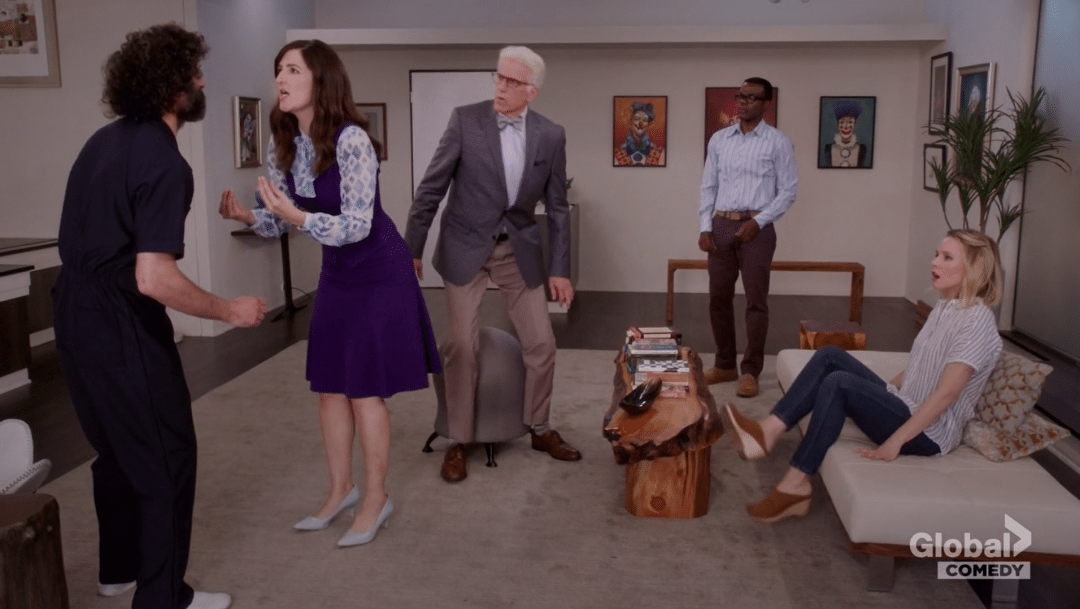 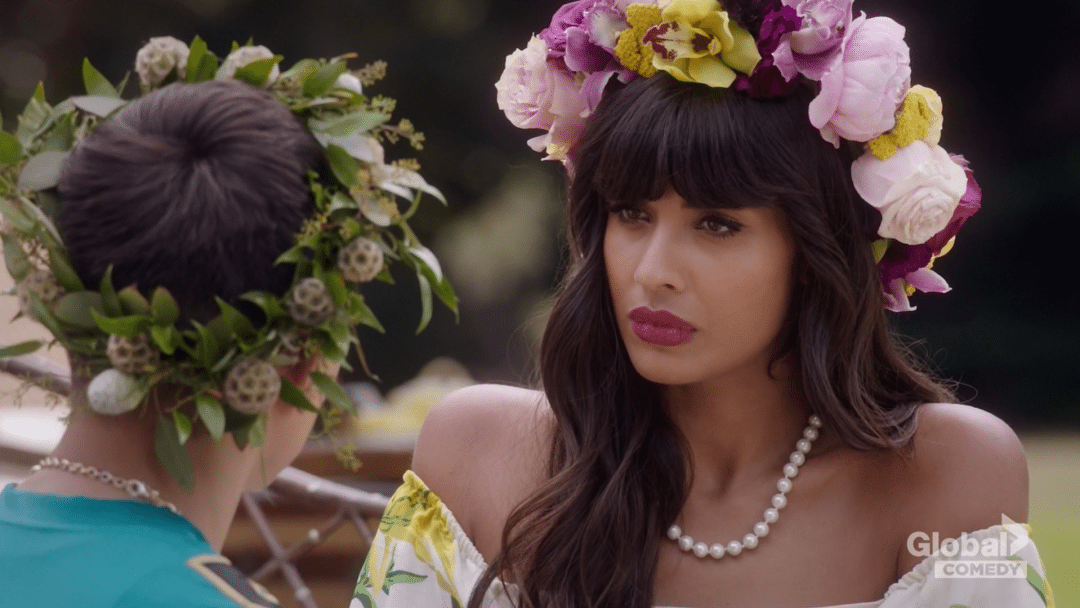 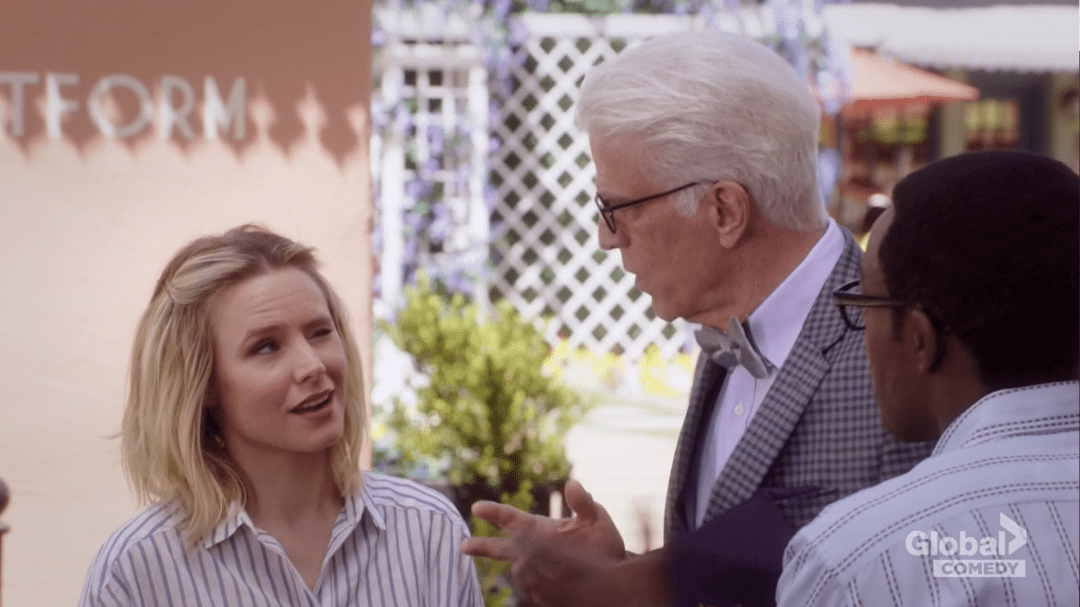 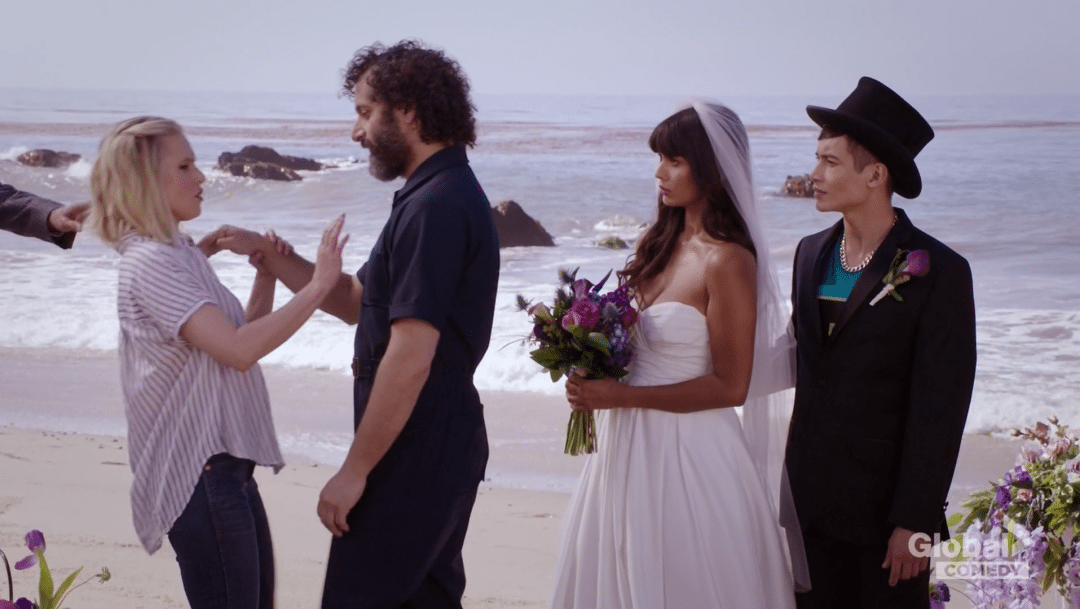 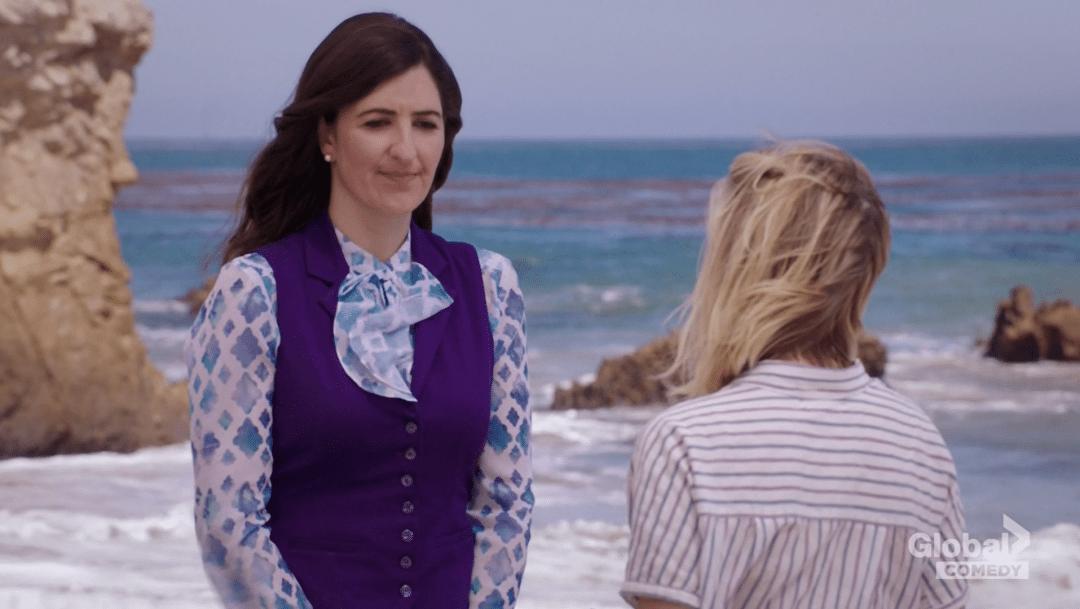 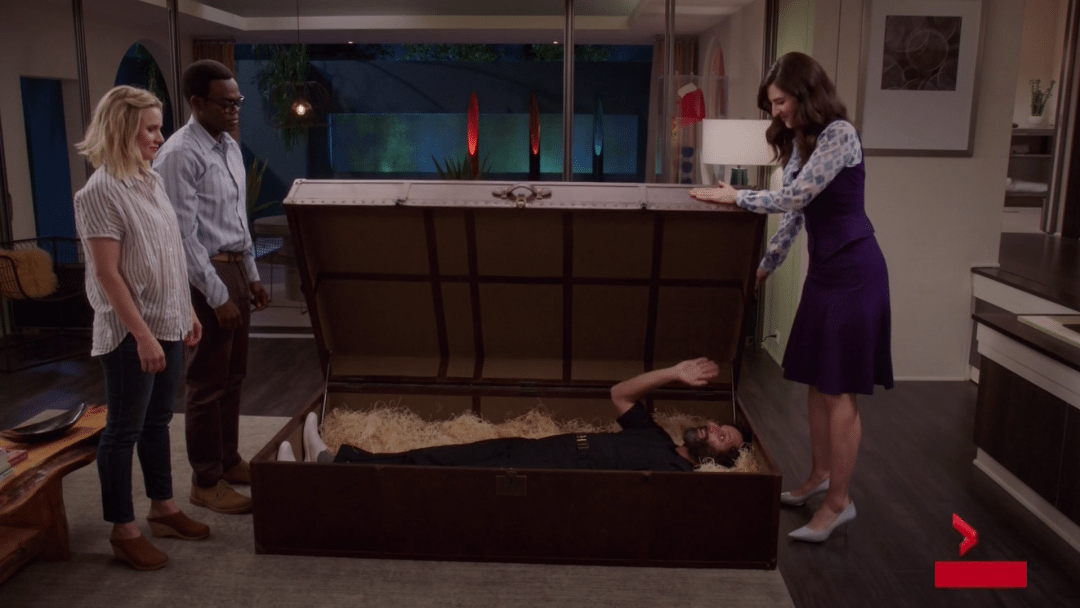 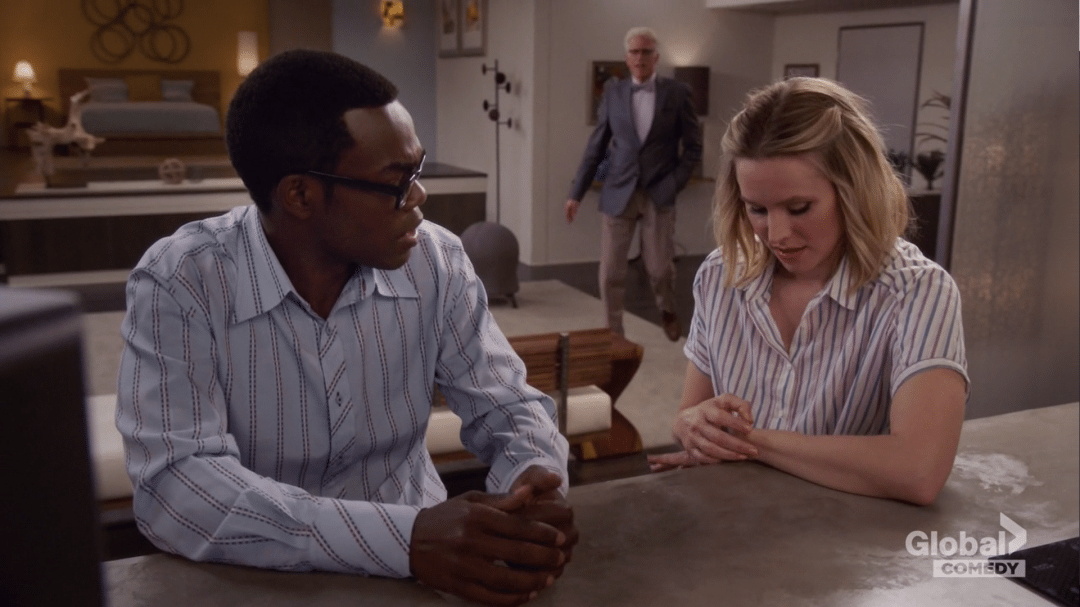 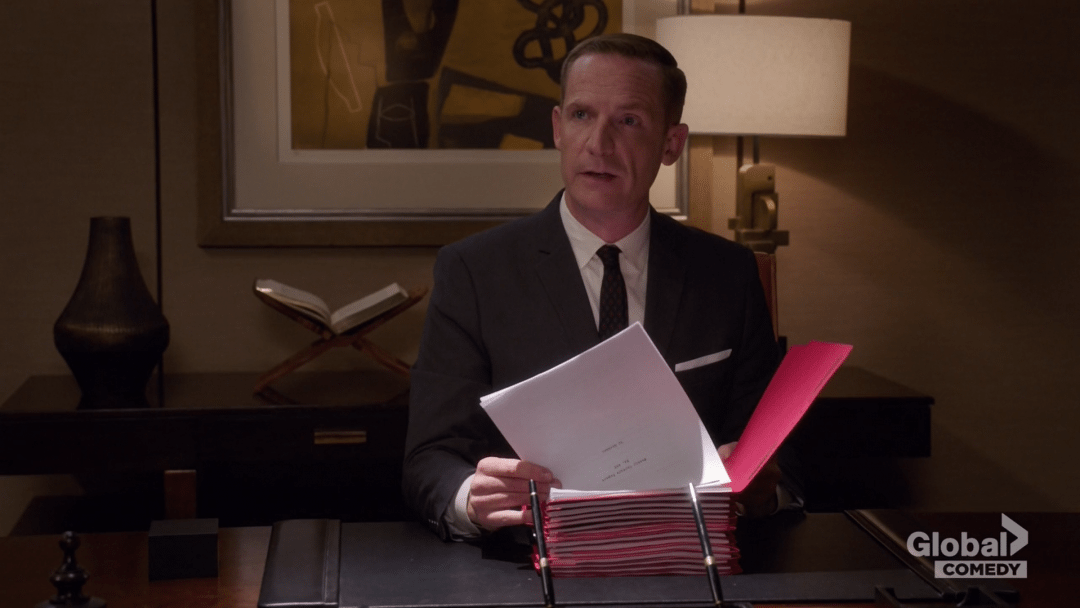 Janet has a mind of her own

Michael demands that she get rid of Derek. Janet refuses point blank. She’s following Eleanor’s advice to find a rebound boyfriend to the letter, and without making a new person, her options are extremely limited. Derek is a bit of a mess, however. At the mention of Jason’s name, he reappears and gets stuck saying ‘Jason’ derisively, over and over.

Janet professes her love for Derek and says they’re so in sync that they’re “finishing each ” Derek blurts out, “Derek!” Janet smiles anyway. It’s clear she’s already decided what she wants and will be very difficult to dissuade.

Michael finds Jason and Tahani together and bustles them out of their home and into a house on the edge of the neighborhood. He portrays it as a vacation, but it’s clear to the viewer he’s trying to fix the Janet problem somehow.

In Eleanor’s house, she is watching the tape of her and Chidi saying they love each other. Neither of them remembers this since Michael reset their memories, but Eleanor recovered a video of it which she is hiding from Chidi. Chidi comes in while she is watching and she awkwardly pretends to be watching a movie. Michael interrupts and shows them their new problem by summoning Janet. Derek pops up behind her. He’s actually even more enthusiastic than Janet. Janet calmly tells them his brain is wrong and Derek laughs. They both disappear.

Tahani is trying out Jason’s way of having fun. Mostly it involves smashing champagne glasses in different ways, but she seems to enjoy it even though it’s pretty far from her normal, pretentious way of doing everything.

Michael, conferring with Eleanor and Chidi, proposes they murder Derek. Eleanor points out Derek is actually helping stop the glitches. Michael’s next scheme requires engineering the breakup of Jason and Tahani. His theory is that with Tahani out of the picture, Janet won’t have to be jealous and will eliminate Derek on her own. Eleanor, predictably, loves this idea since it involves relationship drama. Michael is flattered by her praise.

Chidi pulls out ethics and puts a damper on Eleanor and Michael’s delight. Chidi says they can’t tell Jason and Tahani about Jason and Janet’s previous relationship to save themselves. This seems like a pretty weak argument. Undergoing a breakup is clearly the lesser of two evils when considering that versus being sent to the Bad Place.

Jason and Tahani are having a great time with their little vacation getaway. Basically out of nowhere, Jason proposes marriage. Tahani becomes very serious and the camera cuts away.

Tahani and Jason get serious

Back at Eleanor’s house, Michael summons Janet to tell her that she can keep Derek as long as he stays a secret from the other demons. Janet pops into existence in answer to his summons, with Derek in tow. Both are screaming at each other, pulled out of the void in the middle of a big fight. Neither listens to what Michael has to say and essentially storm off, Janet back to her void and Derek going somewhere unknown. This is exactly what the crew feared. Derek is loose! If the other demons realize something is wrong with Janet, their whole subterfuge

Tahani agrees to marry Jason after he promises to always be nice to her. Aw. Janet is summoned to help with their wedding, but she’s almost sobbing.

Michael, and Chidi rush around the neighborhood, finding Derek up a tree. He’s shaking its leaves and mumbling, “Nice to meet you.” He says the tree is his new house. Yes, there’s definitely something wrong with his brain.

Janet shows up to hand out invites to Jason and Tahani’s wedding. She and Derek exchange some verbal barbs before she leaves to be alone in her void. Derek gets mad and follows her to finish the fight they just started.

Michael insists they stop the wedding by letting everyone know Jason and Janet used to be married. Chidi insists they be ethical and tell them because it’s for their own good, not so Janet deletes Derek. Michael agrees it would be bad to kill Derek and winks while saying the word “wink.” Eleanor winks too. Chidi frantically disagrees. Michael doesn’t follow but is willing to pretend he does as long as everyone gets told and Derek dies in the end.

Jason and Tahani are getting married at the beach while Janet officiates. Michael interrupts right as Tahani is saying “I love you” to Jason. Michael is about to tell them but can’t because “Professor Buzzkill got in [his] head.” Michael really has changed a lot. He’s become so humanized that he is passing up on the opportunity to cause people pain.

So Eleanor tells them Janet and Jason were married before they both were reset. She summons Derek. He mistakes Eleanor for Jason (it bears repeating yet again that there’s something wrong with his brain) and yells at her. But the wedding is put on hold, so at least they accomplished that goal.

Eleanor counsels Janet once more. She admits she made a mistake by telling Janet to get a rebound boyfriend. She didn’t understand how Janet felt about Jason and thought a quick relationship would erase the memory. Eleanor says that time will make it better, But Janet doesn’t experience time. She says she uses “it as lotion occasionally.” Eleanor says, “Weird. But keep doing it, cause your skin looks amazing.” Janet: “Thank you. Not skin.” Eleanor says Janet can talk to her about her heartbreak anytime.

Janet decides to eliminate Derek. She kisses him and transfers back the thoughts and emotions she gave him on his creation. After that, she puts him in a box and shoves him into the void. He’s not dead though. He’s still saying “Derek!” while inside the box. Janet explains he’s “as dead as he can be.”

Eleanor shows Chidi the tape of them telling each other “I love you.” Neither of them remembers this and Eleanor is fishing to see if Chidi has any feelings like that now. Chidi says he doesn’t and Eleanor is hurt and awkward.

Michael saves the day by showing up and sparing her the aftermath of showing Chidi the tape. He’s worn out with trying to not be evil, and asks when it gets easier to be a good person. Eleanor explains in a rare moment of seriousness that doing good rid of “the little voice” (her conscience). It seems clear to me that she keeps trying to be good to gain Chidi’s approval. He’s the only real difference between her life on earth and her life in the faux Good Place. Michael, however, accepts this explanation and goes back to his office.

Michael walks into his office with his bow tie untied. This isn’t as shocking as what he finds: his boss demon reviewing his files. He says, “Hello Michael. Shut the door. Have a seat.” The camera zooms in on Michael as the episode ends.

Read our other The Good Place episode recaps here