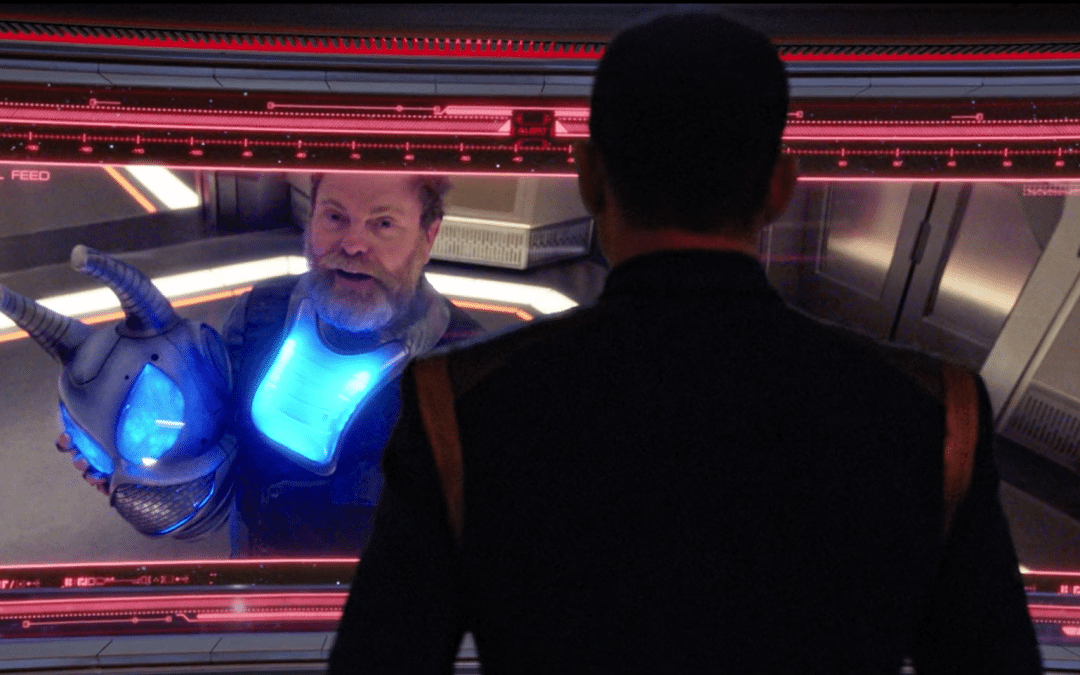 The best way to describe this episode is: super fun. Also, time loop! 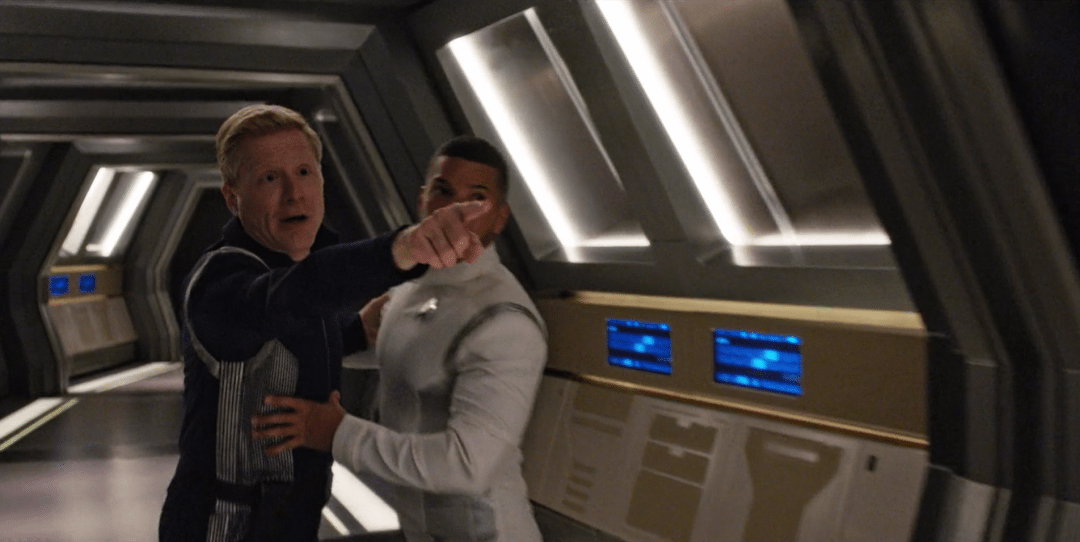 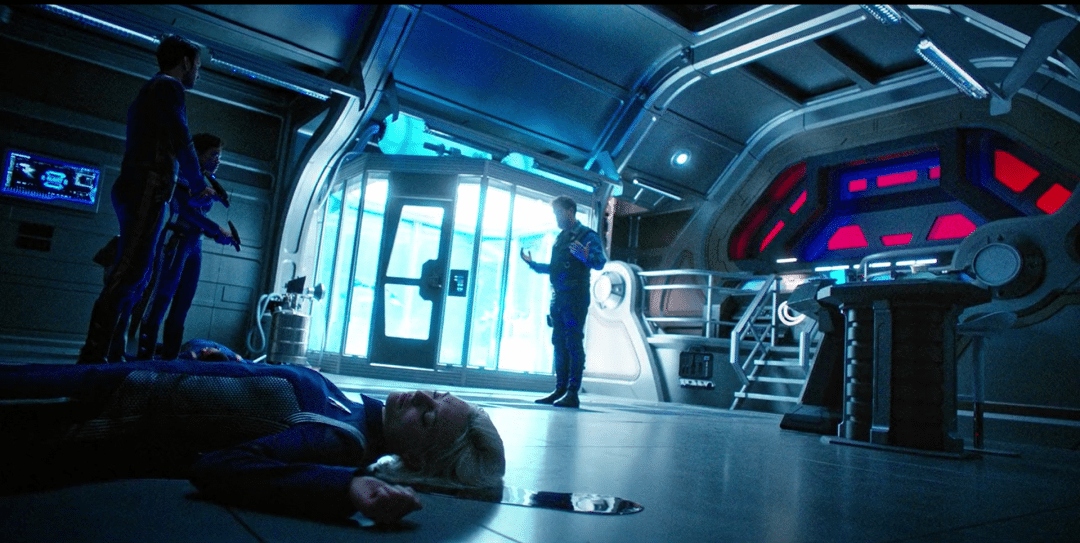 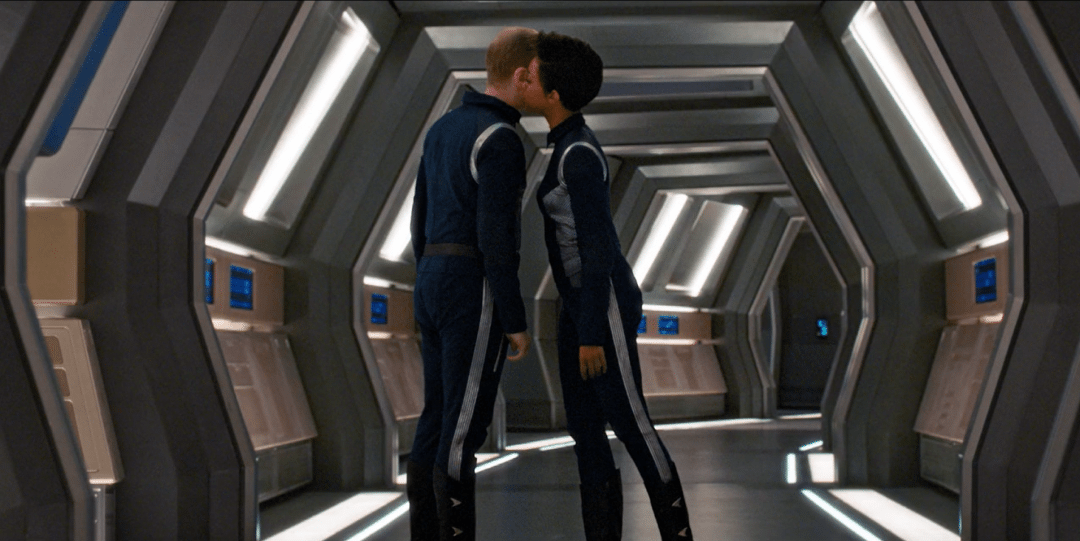 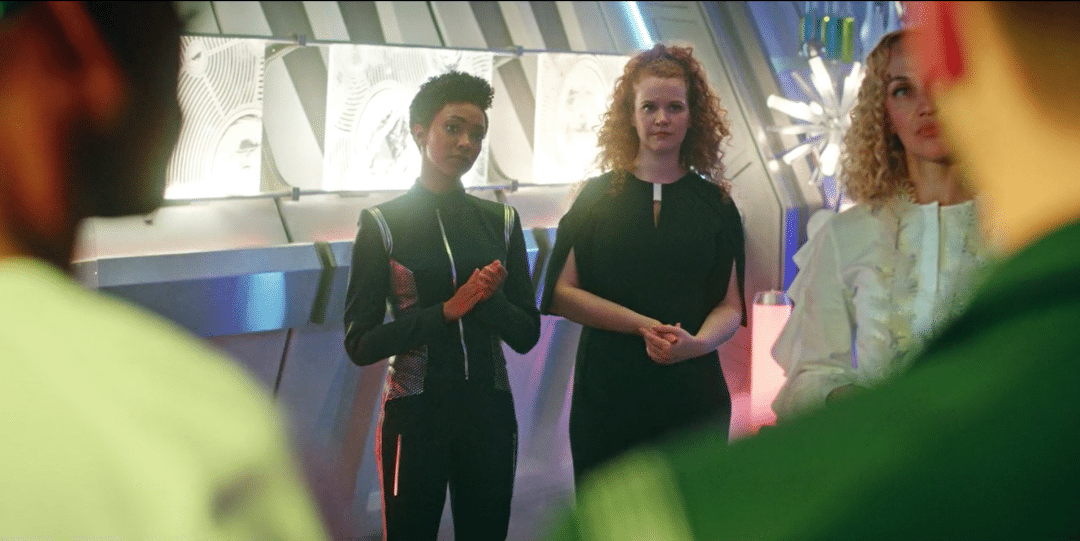 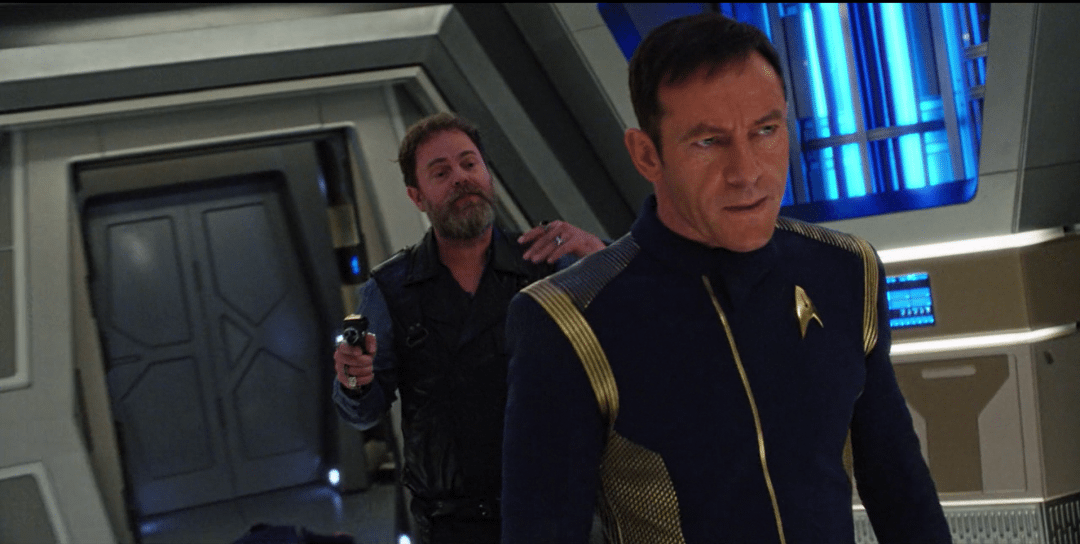 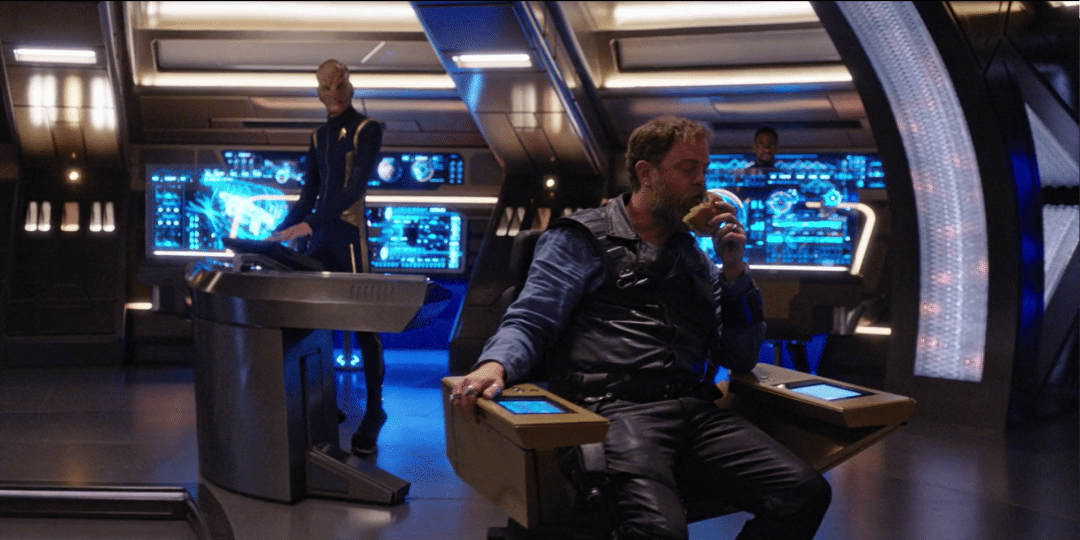 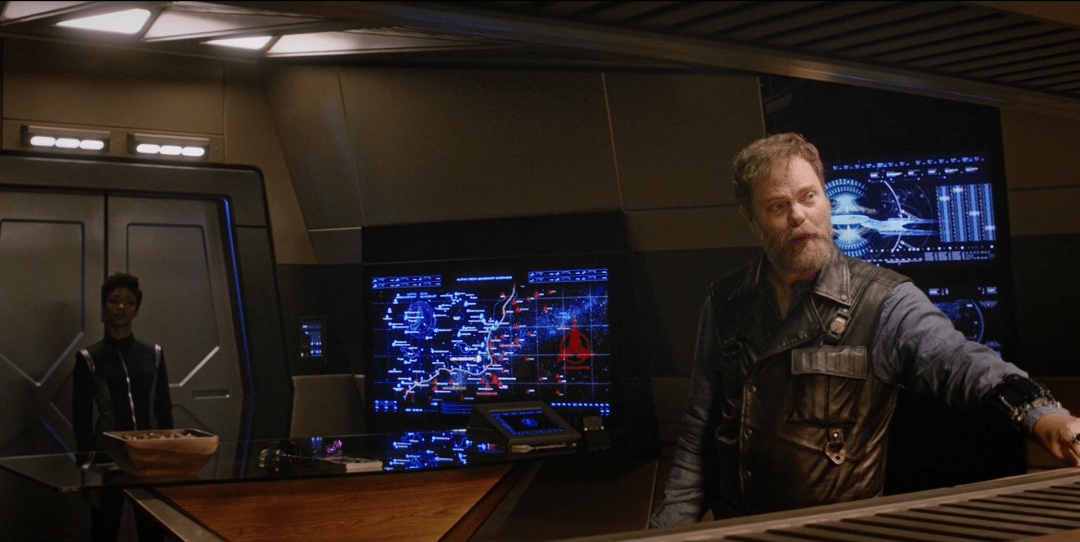 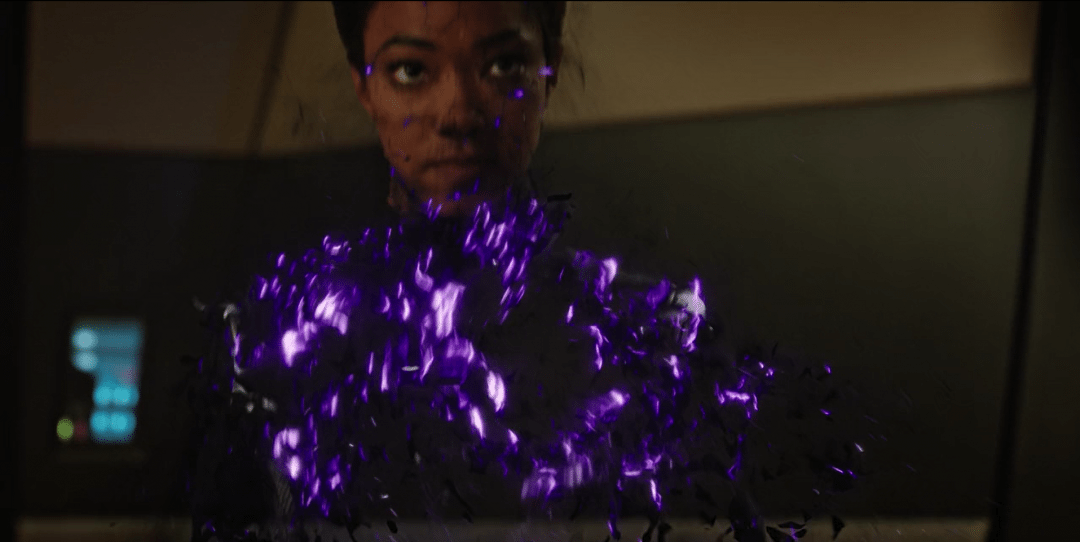 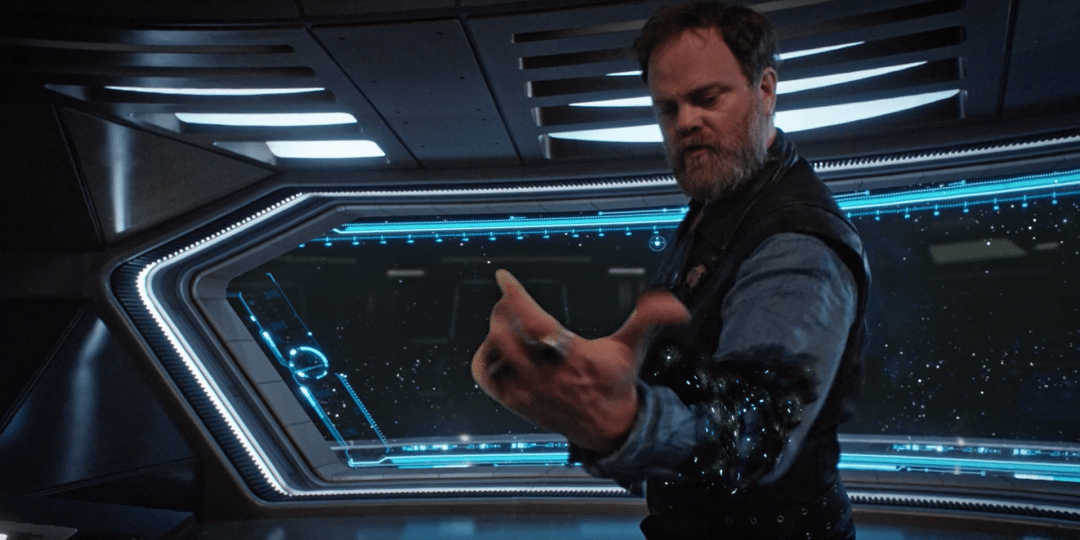 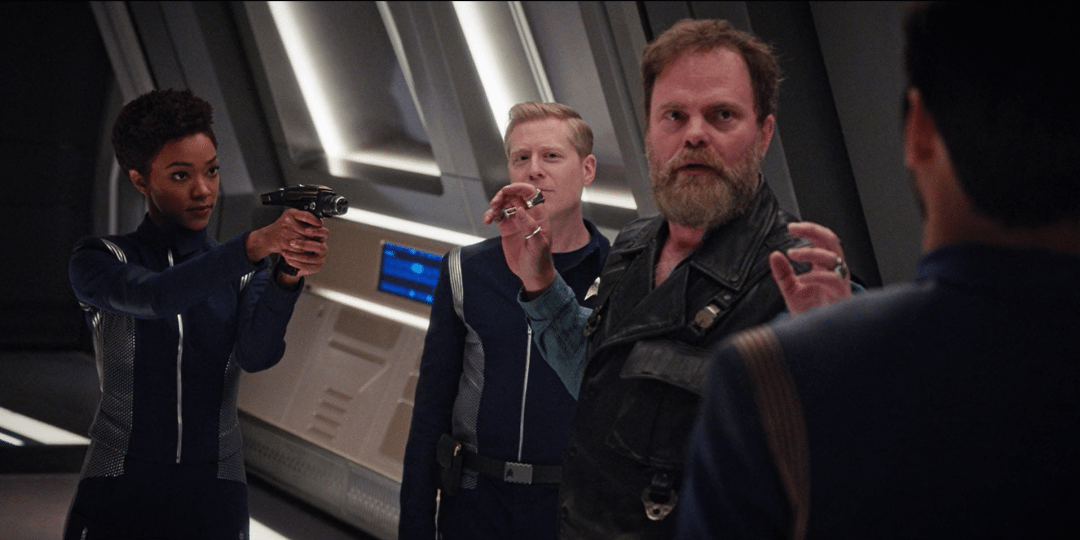 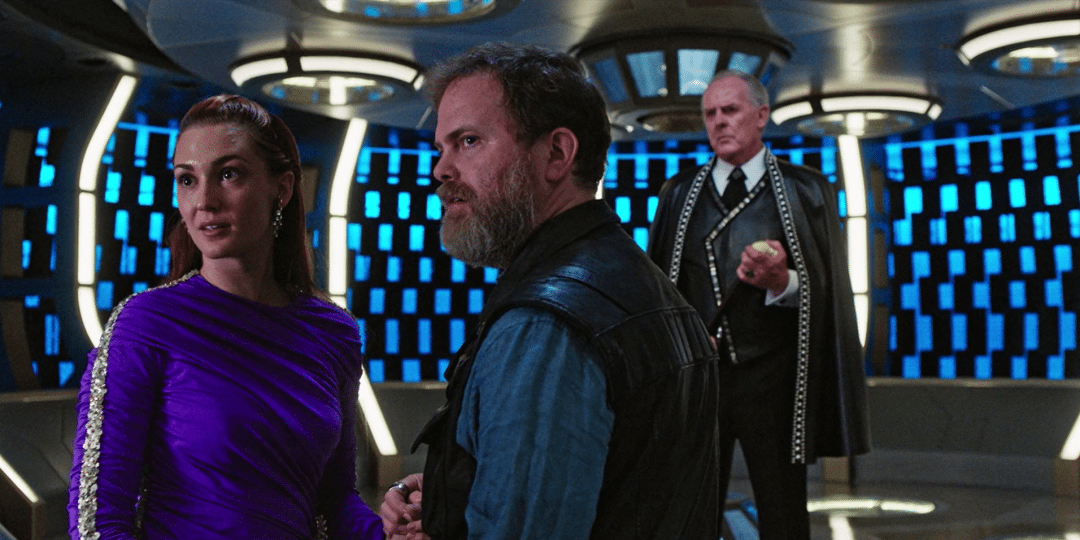 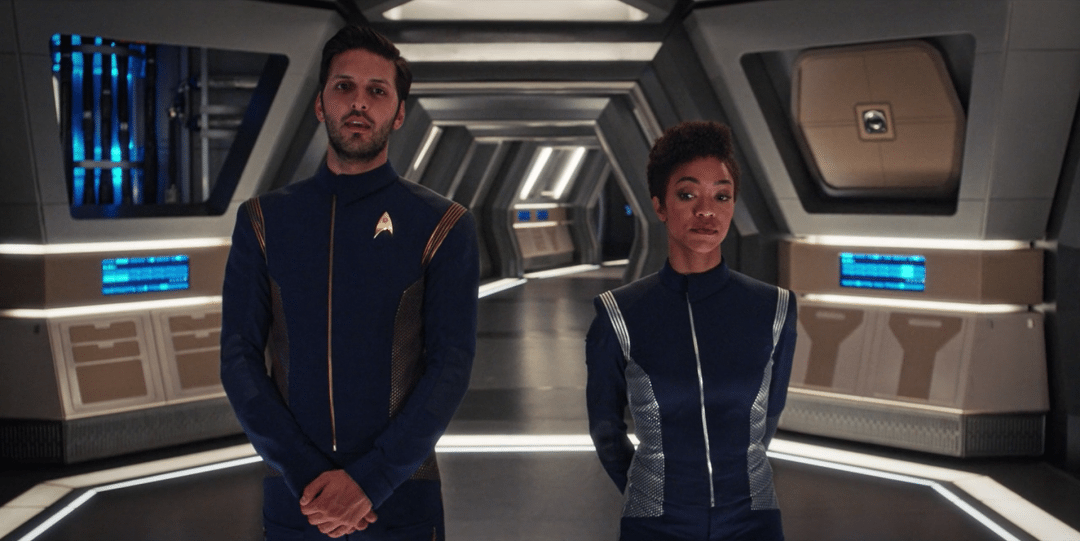 This episode begins with Michael’s voice narrating: “Personal log, Specialist Michael Burnham, stardate 21-36.8… ,” a twist on the classic opening of the original Star Trek series. Poor Michael is having a hard time personally now that she has once again settled into Starfleet professionally. Probably why she needs to keep a personal log, because she’s not comfortable talking to her equals.

Before, as a prisoner and then a rankless member of Starfleet, she didn’t have time to focus on her problems; she had too many. Now she’s pushing herself outside of her comfort zone by going to a party and standing awkwardly in the middle of the room. She’s developing a crush on Ash Tyler as well, which will almost certainly end in betrayal.

Lt. Stamets is becoming increasingly strange. He seems… high. But he’s very positive and much nicer this way.

Michael and Ash are called to the bridge where Michael discovers an injured Gormagandor journeying through space. Gormagandors are almost extinct, and Starfleet regulations require that any injured members of the species be helped. They beam the creature on board. I expected there would be a bomb inside the animal (remember Episode 2, where Starfleet snuck a bomb into the enemy vessel inside a corpse). I was very surprised to see a person walk out and start shooting.

Michael calls the bridge for help since she has no sidearm. They trap the intruder, who takes off his helmet and we see Harry Mudd back for revenge. He says he will steal the secrets of the Discovery’s special technology and that he’ll kill the captain “as many times as possible.” That’s a strange thing to say, but he moves on and says he got enough information “this time.” He presses a detonator and the ship starts exploding in a chain reaction until the bridge explodes and we see Captain Lorca die. We actually see him get hit by the flames. The outside of the ship is shown exploding massively. The Discovery is crippled if not completely destroyed.

Suddenly the view shifts back to a pristine and operational Discovery. We see Ash at the party exactly as we did earlier, making his toast. Is this time travel? Alternate realities? This time Stamets doesn’t bump into Burnham. Instead he rushes after her yelling that there’s “too much time.” He gets pulled away ranting “it all starts with a Gormagander!”

About ten seconds later they find an injured Gormagander for their first (Stamets’ second) time. Michael and Ash both become extremely cautious and try to stop Lorca from beaming the animal aboard without saying why, since they have no concrete reason. This time Ash accompanies Michael to the docking bay, his phaser at the ready. This time Michael scans the space whale with a tricorder and detects a transport beam (too late) inside the whale.

The ship goes into a Black Alert and a spore drive jump is initiated. Michael and Ash find Mudd protected by a force field with full control of the ship’s drive. Mudd is proving himself to be an extremely competent enemy. When we first saw him in prison, there was no indication he had the capacity to be a supervillain. But he’s already blown up the Discovery once and he is about to do it again, plus he caught everyone in a time loop, so he’s definitely a supervillain.

Mudd gets shot and falls, revealing Stamets behind him with a phaser. “As days go, this is a weird one.” Stamets tells them this has all happened multiple times before and ignores their urgent commands to fix the spore drive. He peacefully gets blown up, and the cycle begins anew.

Stamets catches Michael alone this time while she’s on her way to beam the Gormagander aboard. He explains they are caught in a temporal loop, and that unless they live through the extent of one full loop it will continue to repeat. Michael thinks he’s insane because of his genetic meddling with his own DNA. He says her words simultaneously with her until she stops talking, convinced.

The Discovery is Mudd’s personal playground

This time (and not for the first time, apparently), Mudd intercepts Captain Lorca in the elevator and tries to get him to reveal the Discovery’s secrets by taking control of the computer and threatening self-destruct. We don’t know what loop we’re on at this point, but it’s a lot more than the third one. Mudd says “every time” casually, like this particular elevator scenario has happened many times already.

Stamets walks with Michael, explaining the situation and his inability to fix it. He makes solid progress by getting Michael to tell him a secret she’s never told anyone. He can use this on the next loop as a key to her unquestioning trust and get an ally for the next loops. He certainly picked well. Michael is far and above the most competent member of the crew. We don’t get to hear the secret though, as she whispers it in her ear.

Mudd and Captain Lorca enter his secret weapons room, and Mudd informs Lorca he has been murdered fifty-three times already and “it never gets old.” We see a montage of Mudd killing Lorca over and over: shooting him with different guns and transporting him into space while Mudd sits in the captain’s chair. He kills him again and watches Lorca be incinerated to nothing.

Michael’s sad secret is one everyone could have guessed

At the party (again) Stamets tells Michael she’s “never been in love.” Michael is hurt and completely taken aback, but it does take her defenses down and prove to her that Stamets is telling the truth, the whole truth and nothing but the truth. Stamets recruits her to get information from Tyler on Mudd, which is awkward for her since she has a bit of a crush on him.

In the next loop she and Ash dance as she talks to him about his imprisonment with Mudd. Michael is completely honest about the time loop and everything. Ash accepts it, and kisses her because he believes it. In a time loop, there’s no need to fear repercussions or consequences. They determine together that Mudd must be using a time crystal, a technology theorized to be possible but unknown to the Federation. Michael, Ash and Stamets join forces to track down Mudd and see if he’s wearing a time crystal. Stamets is making real progress now.

Mudd comes onto the bridge, where he’s greeted by the computer as “Captain Mudd.” He transports Lorca to the brig with a wave of his hand. Ash, Michael and Stamets charge onto the bridge. Ash shoots at Mudd but is thwarted again by a force field. Mudd kills him with weaponized dark matter, one of the most painful ways to die. Stamets admits he is the missing part of the Discovery’s drive, and Mudd transports them both to the engine room.

Michael recruits Tilly to help her examine the Gormagander, explaining the time crystal tech as they work. Michael deduces there must be a larger time crystal on board for Mudd to continue the loop. They find Mudd’s ship and the bigger time crystal inside the distressed space whale. Michael realizes the only way to save everyone and defeat Mudd is to trick Mudd into resetting the loop himself.

Mudd is in the Captain’s quarters, narrating his own captain’s log. Michael enters the room. She compliments him and he happily begins talking about himself and Stella, the love of his life. He sends the ship’s coordinates to the Klingons and is very pleased with himself.

Michael reveals that she is the one who killed T’Kuvma and consequently how much she is worth to the Klingons. She’s worth more to the Klingons than the entire Discovery and all its secrets. Mudd is almost salivating as he thinks of the price he’ll get for her. But Michael was just baiting the hook. She grabs one of his dark matter marbles and swallows it, evaporating from the inside out in a death painful enough that even Mudd recoils in horror.

He resets the time loop yet again, falling right into her plan. His greed will be his own undoing. Whatever the plan is, she’s forgotten it with the latest time reset but she’s way too smart to be defeated by that. If Mudd is a super villain, she’s a superhero.

The final iteration of the time loop

We see Michael talking to Ash urgently at the party. As Mudd hacks the ship absentmindedly, not feeling threatened at all, Ash and Stamets convince the Captain of the emergency and take precautions. Lorca greets Mudd as “Captain Mudd” as he enters the bridge. Mudd is chagrined that Stamets has also crossed the time loops and stolen his thunder by explaining the situation.

But Stamets, Michael, Ash and Lorca all tell Mudd they accept the inevitability of Mudd’s victory. Lorca asks for Mudd’s word that he will spare the ship’s crew in exchange for the vacant ship, Michael and Stamets. Lorca and Mudd shake on the deal. Mudd sends the ship’s coordinates to the Klingons. He watches his time crystal disintegrate, happy in his own conceit. The computer informs him of an incoming Klingon ship, which hails them.

Mudd escorts Stamets and Michael to the transport bay but Mudd’s prisoners begin talking about Stella, the other half of Mudd’s professed love story. They learned from the ship’s archives that Mudd took Stella’s dowry from her father and ran away. Her father was a powerful arms dealer and put a reward on Mudd to find him. As they talk about his life, Mudd gets nervous and jumpy, and just then Ash pops out from behind, distracting Mudd. Michael makes her move and disarms Mudd easily.

They inform Mudd that he didn’t send the coordinates to the Klingons. He sent them to Stella and her father. They reveal that Ash rewired the captain’s chair, which is another non-critical system like the ship’s archive. Mudd didn’t consider putting non-critical systems under his control. But his real undoing was people: Stamets, whose multi-dimensional Tardigrade DNA puts his existence outside the normal time stream, and Michael, whose shocking intelligence and competence makes her almost unbeatable once she has enough information.

Stella and her father take Mudd away. For some reason Stella is still obsessed with Mudd and forgives him instantly. Her father is less swayed by his charisma but is willing to take him back and keep him on a tight leash for his daughter’s sake. All three beam out. Emergency averted, everyone safe and sound.

Michael and Ash stand together awkwardly and talk about their dancing and the kiss. He tells her to take it easy and says he’s not going anywhere. Still, Michael is very uncomfortable with her feelings and definitely isn’t ready for a relationship just yet.

See our other Star Trek: Discovery recaps and posts here