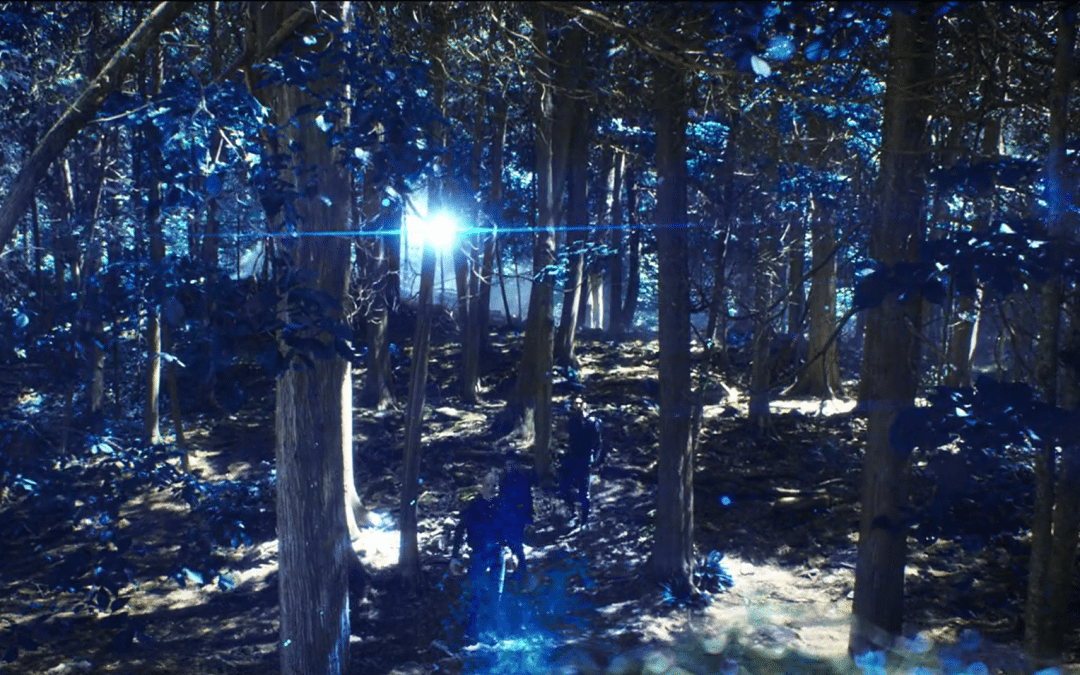 Star Trek Discovery gets back to its roots. 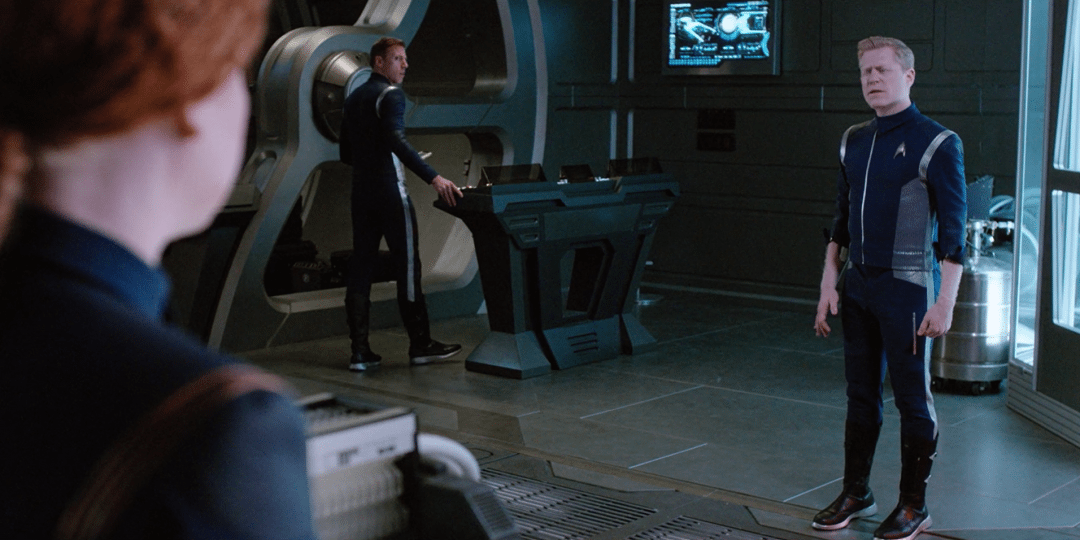 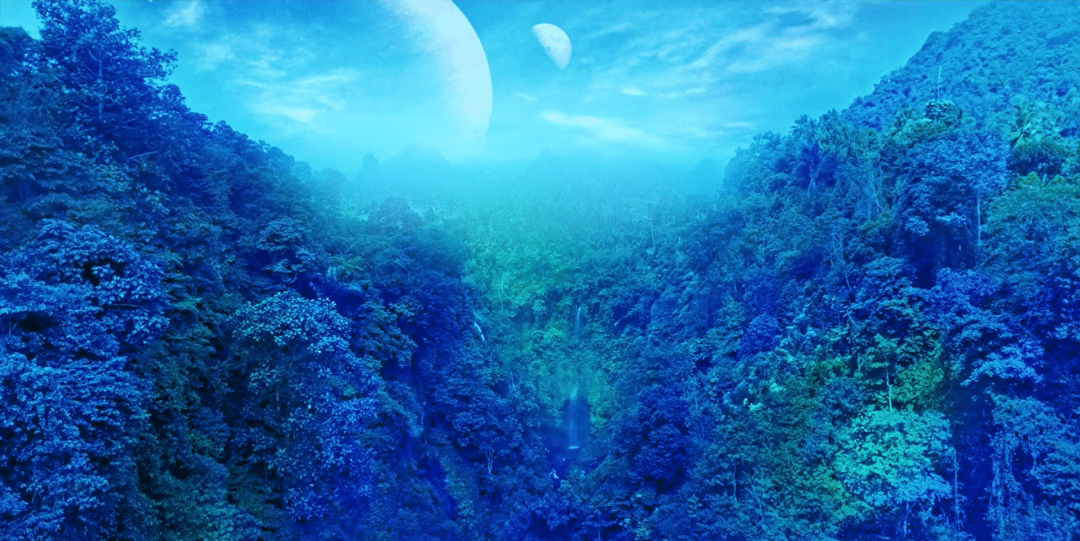 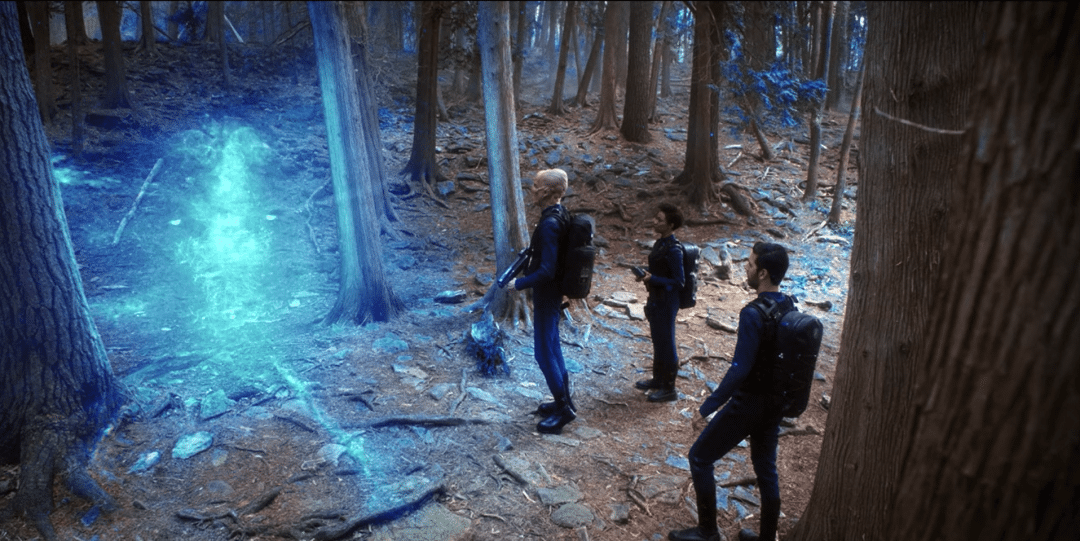 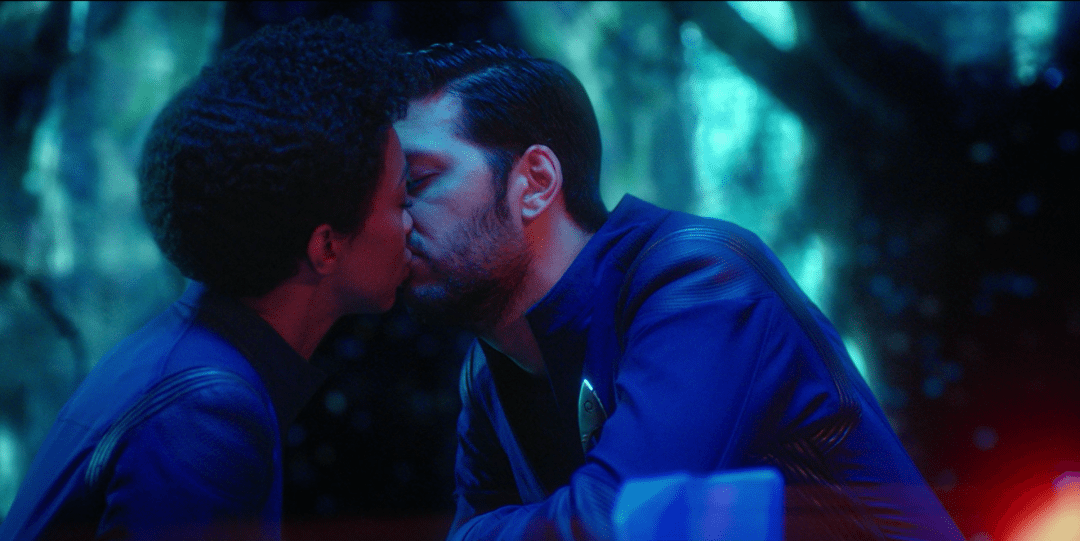 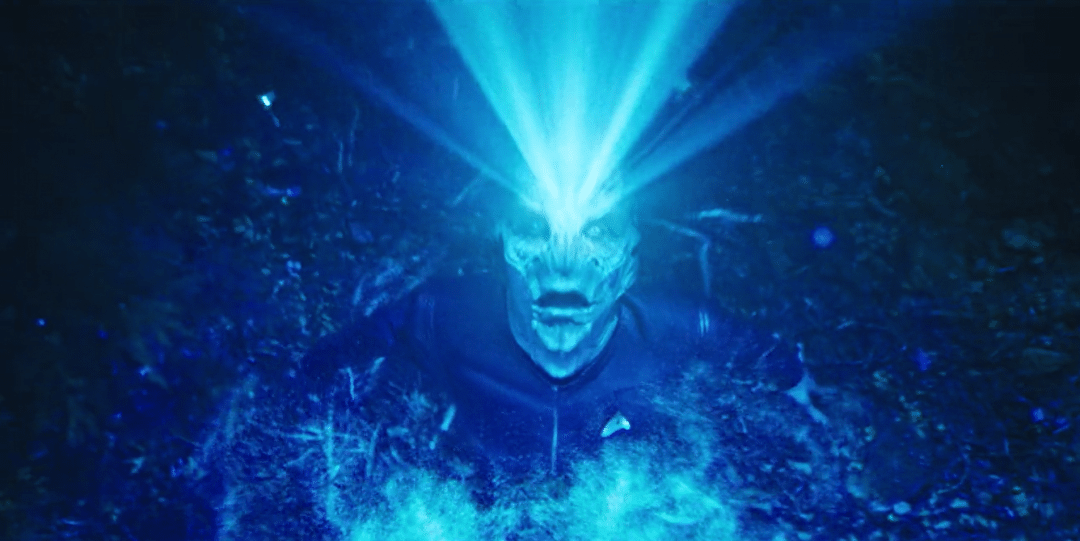 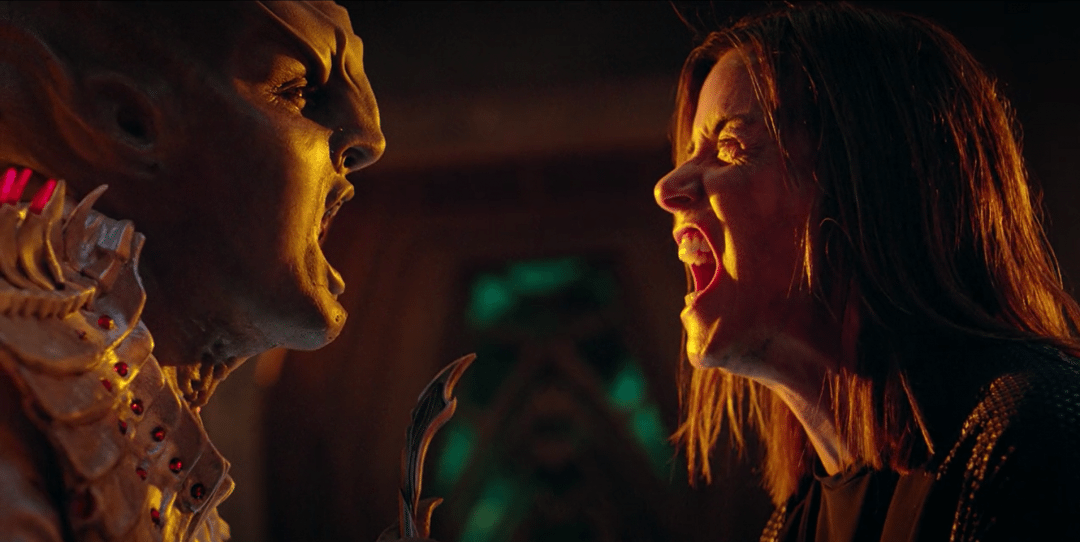 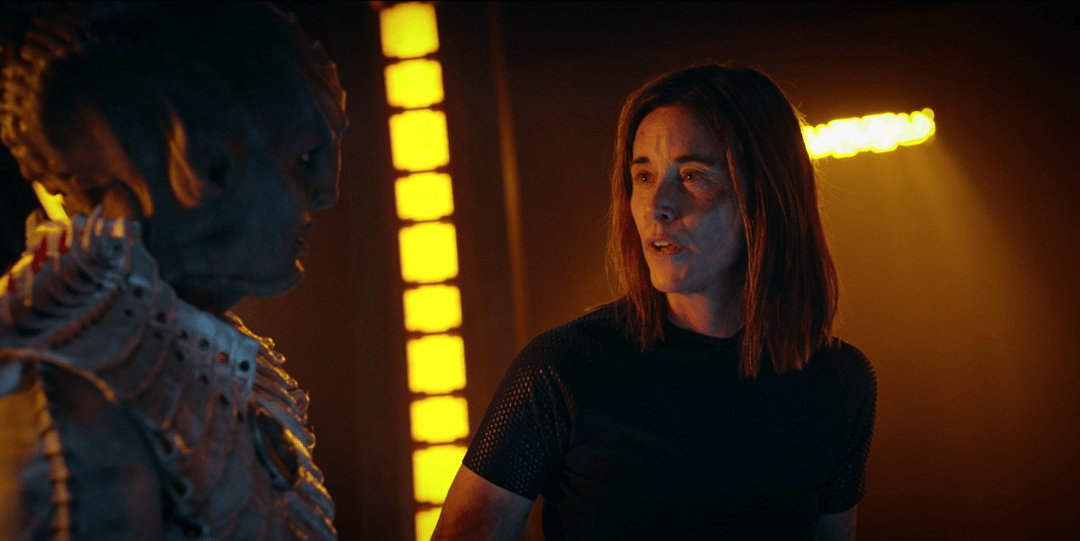 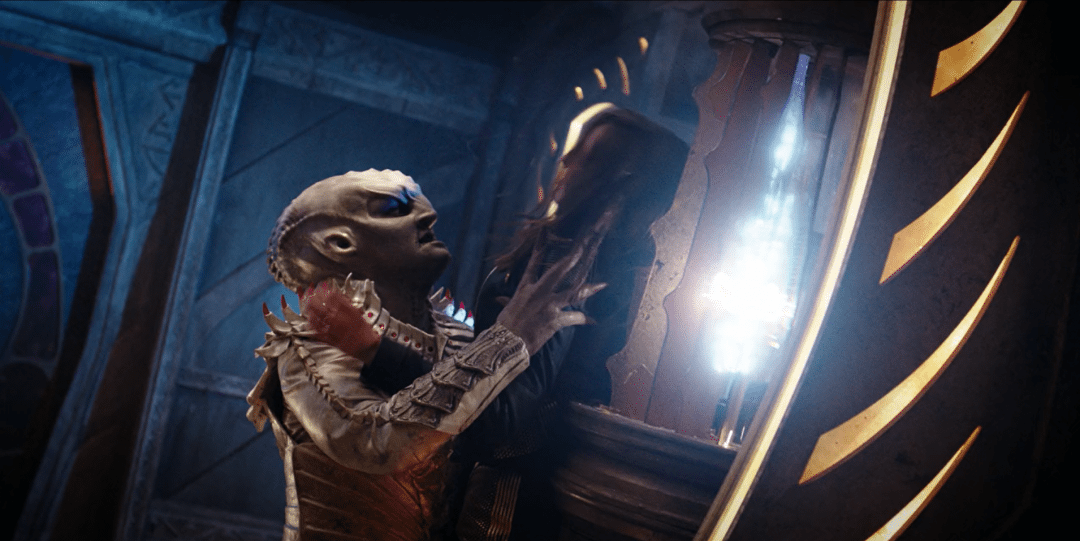 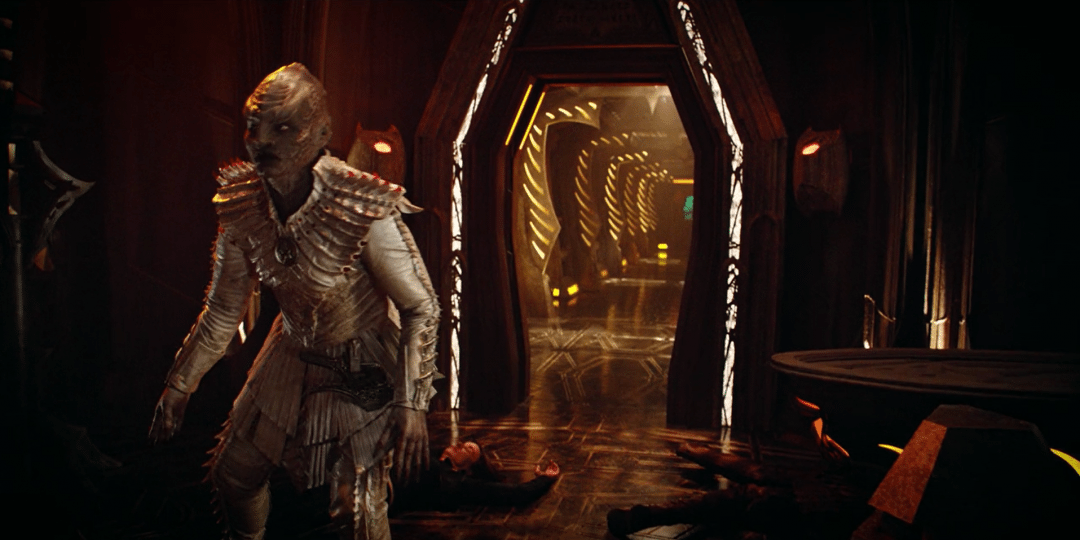 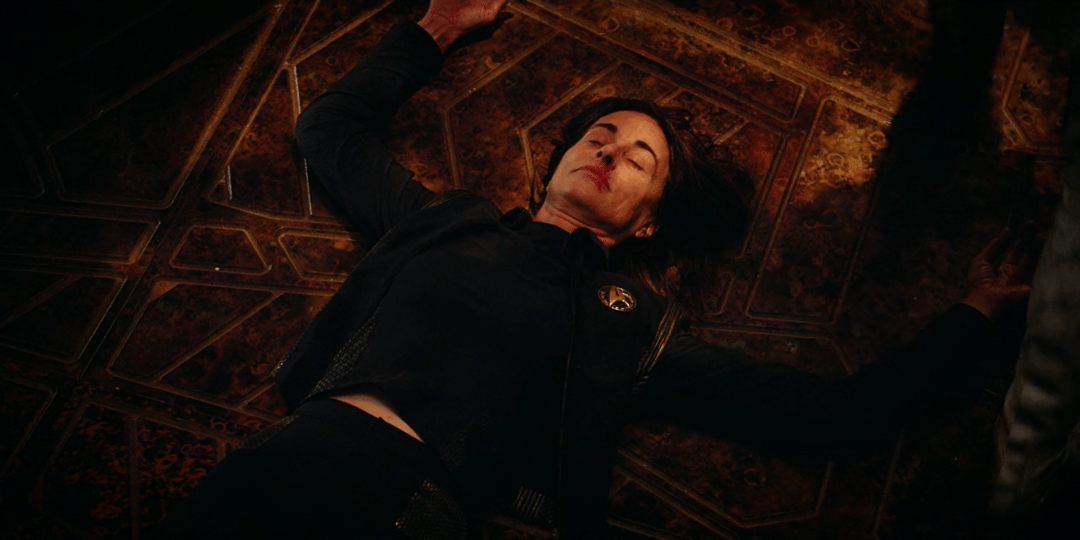 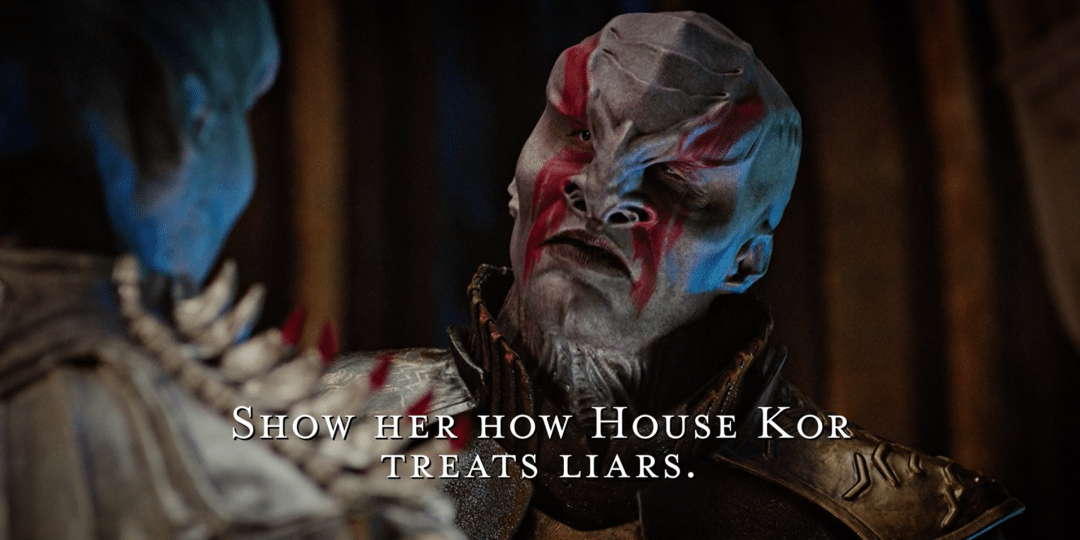 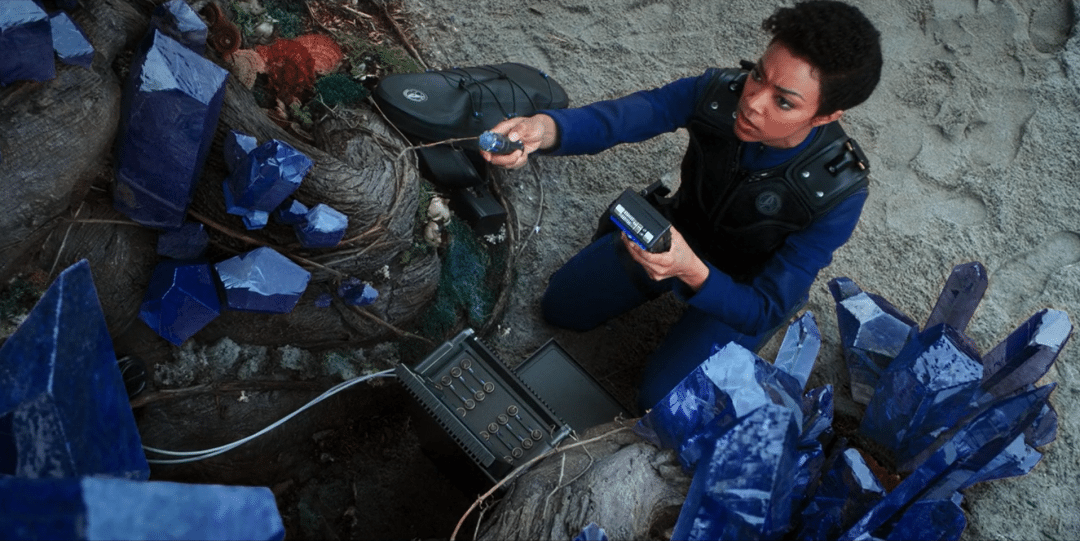 Say hello (and goobye) to the USS Gagarin

The Starfleet ship Gagarin is being pursued and blasted by six cloaked Klingon warships. The Discovery, with its ability to be anywhere at anytime, comes to the rescue and engages the warships. Lorca is almost suicidal in his determintaion to save the Gagarin, throwing his own ship in front of torpedoes meant for the Gagarin. The Discovery catches one, but not both torpedoes. The Gagarin is annihilated. Lorca orders a Black Alert and the Discovery jumps away to safety. Lorca is angry and disappointed.

Stamets is disoriented as he comes out of the spore drive chamber and calls Tilly “Captain.” Tilly is disconcerted and Stamets yells at her to cover his own mistake. Something’s wrong with Stamets.

Lorca consults Starfleet command and they realize that all Klingon ships will soon possess the cloaking ability previously known only to one Klingon house. Starfleet command points out that this makes the Discovery’s new mission even more vital.

Michael, Ash and Saru are on the planet Pahvo, attempting to alter natural resonance and crystal structure to disrupt the Klingons’ cloaking technology. If they can accomplish their goal, the Klingons’ cloaking tech wouldn’t work anymore. They chat as they walk through the forest on their way to the planet’s naturally occurring transmitting tower. Turns out, Saru can run at 80 kilometers per hour and is frustrated at the humans’ slowness. His superior senses are also being overwhelmed by the planet’s sounds which the humans can’t hear.

But all three hear the arrival of some sort of glowing, blue misty creature, which seems to direct them to follow it away from the tower. They oblige in a manner that reminds me of the original Star Trek, which was very eager to follow local customs and avoid conflict. At least in theory. There was no shortage of conflict in the original series either. But this seems to be a rare peaceful interaction in the new series, which makes for a nice change of pace.

In Klingon space, L’Reill attempts to join General Kol’s ranks and earn access to the cloaking technology. He asks for more than her loyalty, and she makes a deal: if she can get useful information from his prisoner Admiral Cornwell, she gets the cloaking technology and swears fealty to Kol. Not a great deal, but she’s crafty. I’m sure she’ll double-cross him as soon as it’s expedient.

Back on Pahvo, the Star Fleet universal translator fails, as does Michael’s tricorder in detecting life as we know it. These are also deliberate callbacks to the original series. I personally enjoy the differences between this and the old series, but I also like that the writers haven’t forgotten the origins of their story. It’s cool to have it all integrated together in this episode.

Saru puts his arm into the glowing blue particles and seems disturbed. He says he was just disoriented, and they mean no harm. Michael points out they can’t accomplish their purpose now without achieving communication. Ash, oddly, asks if this is because of General Order 1. Michael explains General Order 1 forbids revealing Starfleet members to sentient races incapable of warp travel, which doesn’t apply here at all.

Ash is so sketchy

Weird mistake, Ash. They didn’t address Ash’s strangeness in the last episode, but there’s something very off about this guy. How can he not know what General Order 1 is? That’s super suspicious. I still think he’s been brainwashed by the Klingons, or that he’s (somehow) Voq in disguise. The second seems more improbable but is more likely, given that Voq has been absent from the show for exactly as long as Ash has been in it.

Anyway, Michael explains to Ash (or whoever he is) that now they are required to follow First Contact Protocol. This requires that the race in question understands and accepts any changes Starfleet might wish to make to their property. If understanding and acceptance aren’t reached, Starfleet can’t proceed.

L’Reill is gearing up for her enhanced interrogation of Admiral Cornwell, who we finally get to see for the first time after her capture. L’Reill walks into the prison chamber, which is very spacious. Cornwell is still wearing Starfleet clothes too.

I’m starting to doubt these Klingons are as mean as they think they are. If you want someone to be as uncomfortable as possible, don’t give them a big room with decent lighting, give them a dark closet. Don’t let them keep symbols of what motivates them (like her uniform). I know Klingons think they’re the most evil guys around, but psychological warfare is definitely not their strong suit.

L’Reill, torture device in hand, walks up to Cornwell and says, “Scream.” Cornwell refuses. L’Reill screams in her face and the Admiral screams back. The guard chuckles and walks away. L’Reill says, “Now we can talk.”

Ash and Michael kiss for the first time, again

Ash and Michael share a tender moment as Saru continues to develop his own, less romantic relations with the blue, glowy misty particles. Ash reminisces about his lake house and fishing for trout. Michael points out in a rare moment of self-pity that she will go back to prison when the war ends. Ash says maybe they should just let the war continue then, so she never has to go back to jail.

Michael says weakly, “But the needs of the many…” and Ash interrupts. She’s touched by his concern, and they kiss for the first time. Well, the first time they’re outside a time loop. See the last episode recap. It happened, and they know it happened, but they don’t remember it. Time loops are confusing.

Tilly sits down with Stamets and demands an explanation for his weirdness. He admits that his grip on reality – at least this reality – is slipping at times, replaced by different memories. He won’t accept medical help, but Tilly proposes they monitor his degradation. I imagine this will be of limited use.

The stage is being set for something to go terribly wrong. Remember, Stamets is the one who guides the Discovery where he wants it to go. If his grip on which reality he belongs to fails, they could end up in any number of other universes. This, incidentally, supports the theory that Captain Lorca is not the Lorca from this universe. But we’ll see.

Cornwell talks with L’Reill, who says she wishes to defect. This seems like complete nonsense, and the Admiral is suspicious. But as L’Reill says, what choice does she have?

Saru has made progress with the planet’s blue essence. He tells Michael and Ash that the particles are the planet. Saru is exhausted by the incessant noise and needs a break.

But the noise won’t allow him to sleep either. Saru goes outside and desperately asks the planet to cease its noise. The particles enter Saru’s head and a blue light shoots out of him. He seems satisfied.

The next morning he seems much more chipper and asks for Michael’s and Ash’s communicators. They give them to him and he crushes them with his bare hands. I didn’t realize he was so strong, and by the look on Michael’s face, I’m not the only one who was disturbed. Saru says the Pahvans are super nice and will help them do anything they want, so they don’t need the communicators anymore. He plans to stay on Pahvo forever. To him, this is paradise.

Michael says Saru is untrustworthy now, but still believes in Starfleet protocol. Ash again shows flagrant ignorance or disobedience of Starfleet protocol and takes command of the mission, proposing they alter the transmitter without permission of the Pahvans.

Saru finds Ash alone and tries to convert him to Saru’s understanding of the planet’s ideals. When he realizes that Ash is simply buying time for Michael to do something alone, he is enraged and throttles Ash.

Michael is attempting to use the crystal structure to contact the Discovery. Saru pounces on her from behind and starts smashing her equipment. Michael and Saru have an all-out fight. Saru is frighteningly strong, and Michael is no match for him in hand-to-hand combat. She gets a club, which helps, but it takes her phaser to stop him. She must have used it on the lowest setting, because Saru isn’t even stunned, it’s just hard for him to stand up.

Suddenly Ash appears out of thin (blue) air. The particle creature is back and brought him along. Saru pleads with it to stay neutral in the war and not risk retribution at the hands of the Klingons. Michael asks it to contribute to peace outside its sphere by helping defeat the Klingons. It changes its frequency, apparently acceding to Michael’s request and Saru practically cries.

L’Reill is going to kill Kol, and maybe killed Cornwell

The Discovery makes contact and beams them all up. Saru is dejected and ashamed. He explains he’s never had a single moment of his life in which he was unafraid, and at peace. He was so happy that he tried to hold onto the freedom at the expense of his crewmates, mission, and the entire fate of the war. Saru has never had this much screen time, and he seems much more human.

L’Reill has been caught walking the halls of the Klingon ship with Cornwell. In an attempt to cover up their plan, L’Reill assaults Cornwell, pretending that she was trying to escape. Cornwell is electrocuted to death (or unconsciousness? It’s implied she’s dead) and L’Reill drags her away. She enters a room filled with the bodies (to L’Reill’s grief) of her Klingon compatriots. She swears vengeance on Kol.

Kol is angry that she let the Admiral get out of her cell, but L’Reill says he still needs her. Kol accepts her fealty and paints her face red. All seems to be going according to her plan until Kol has his guards take her away and calls her a liar. This guy is hard to get a read on. He seems stupid, but maybe he’s not. The scene ends as the Klingons receive an invitation to the planet Pahvo. Uh oh.

Time for a showdown

Back on the Discovery, Lorca angrily tells Michael that the planet Pahvo is now transmitting on two subspace bands: those used by the Klingons and those used by Starfleet. The Pahvans are trying to negotiate peace between both sides by inviting them to Pahvo. The Ship of the Dead warps in, with nothing between it and the peaceful, naive Pahvans except the Discovery.

SEE OUR OTHER STAR TREK: DISCOVERY RECAPS AND POSTS HERE