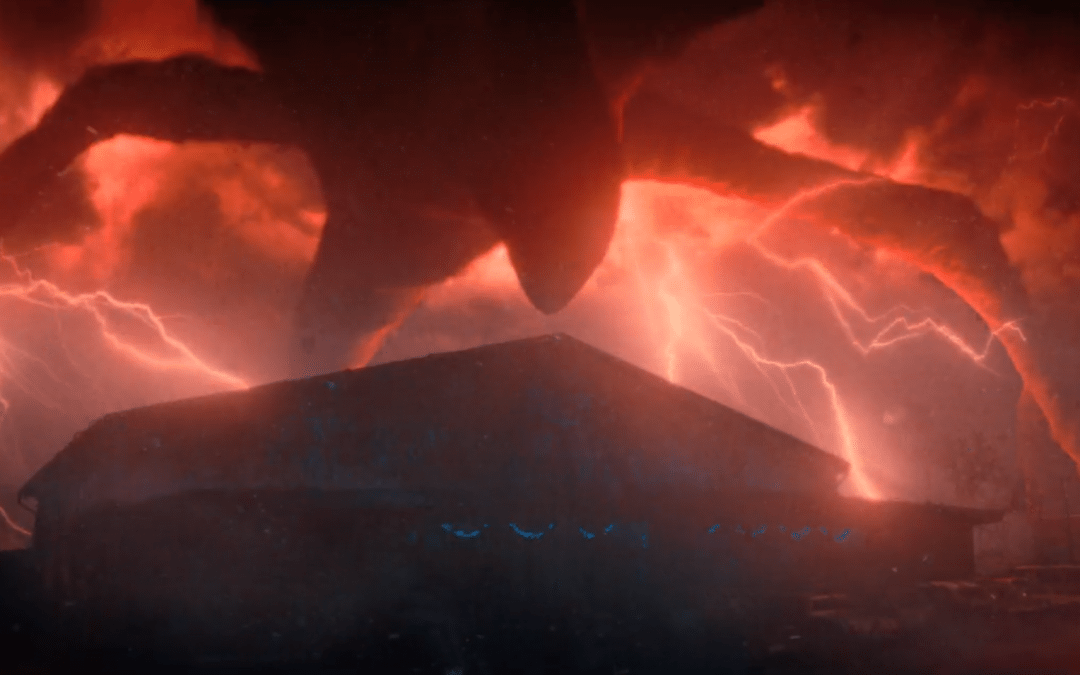 Mike and El hug, a moment they’ve been waiting for all season.

El cries, and Mike smiles. Hopper explains he’s been hiding her and Mike punches him. El and Hopper greet each other belligerently, but give each other a side hug anyway. Hopper takes Mike aside into another room, telling him that he kept her hidden for her own safety, and not to be mad at El. Mike isn’t mad at E, he’s mad at Hopper, and punches him quite a few times in the stomach (go Mike!) while calling him a liar (true) and a piece of s*** (true). It’s easy to see where Mike’s coming from, especially since we saw how badly Hopper behaved when he was serving in loco parentis to El. 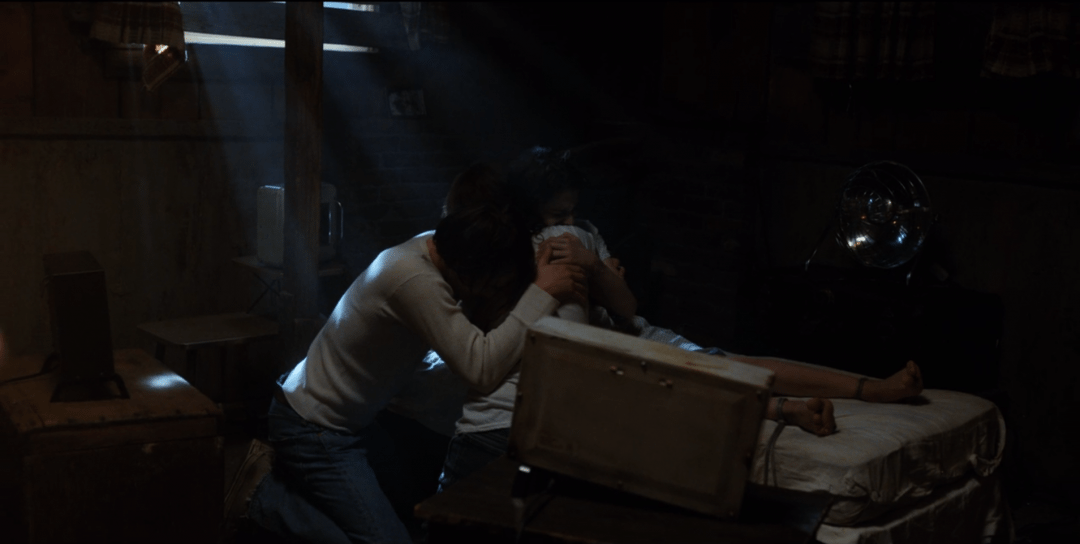 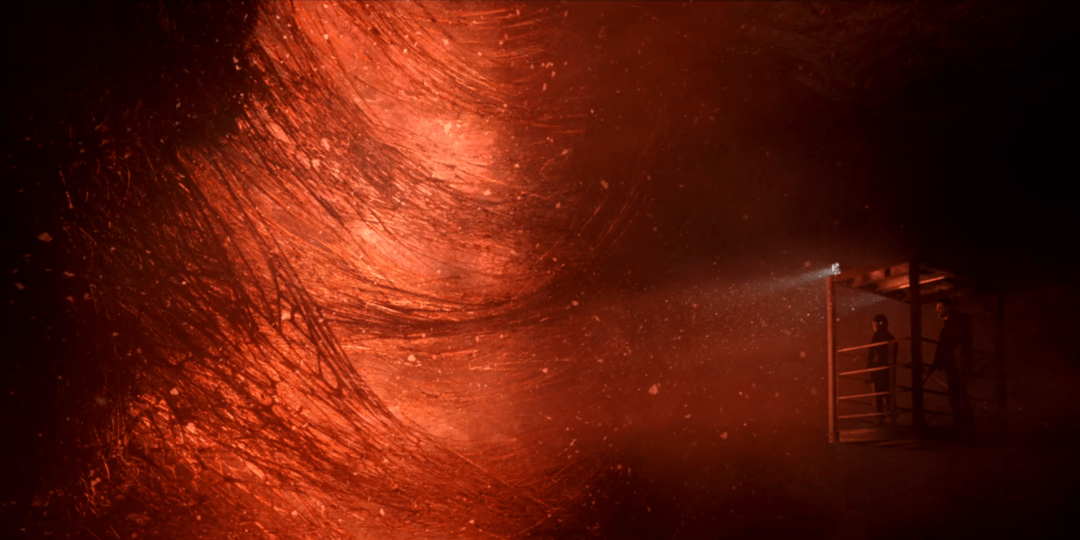 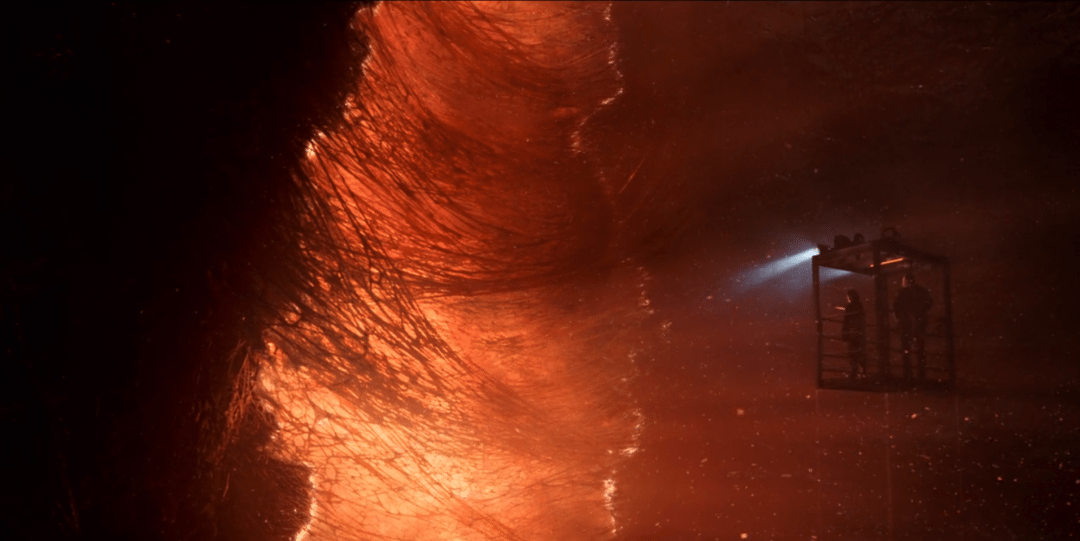 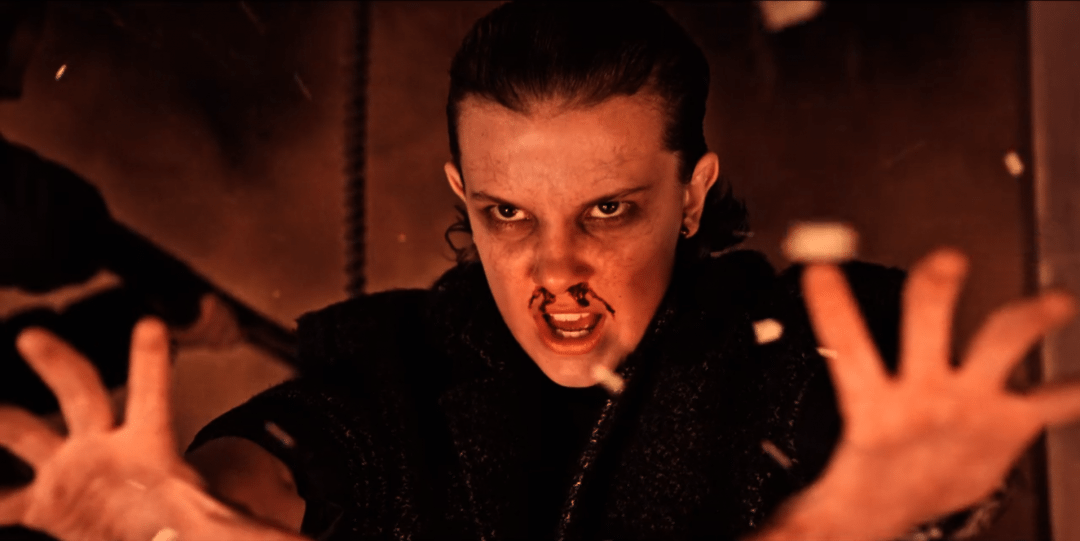 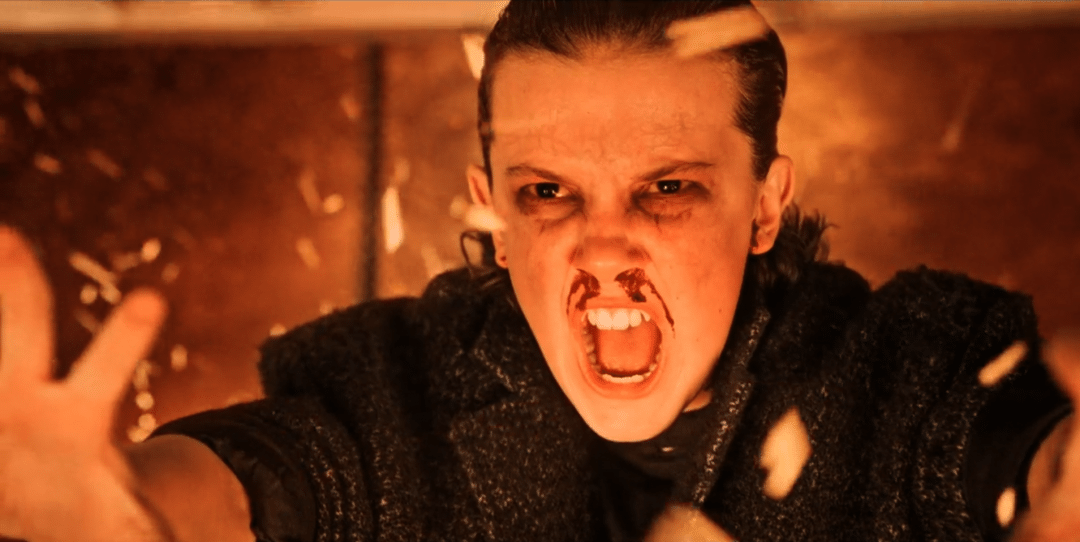 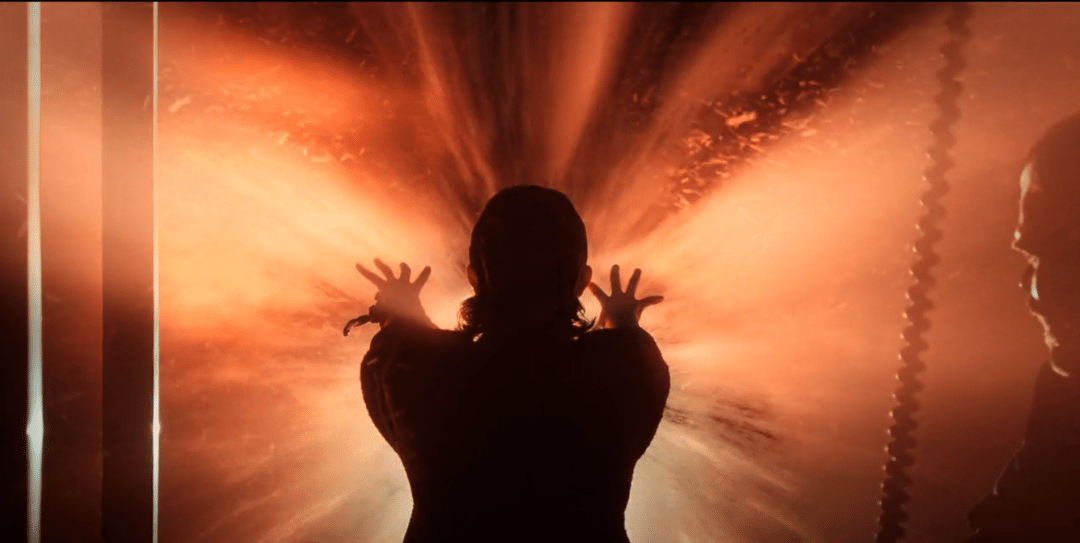 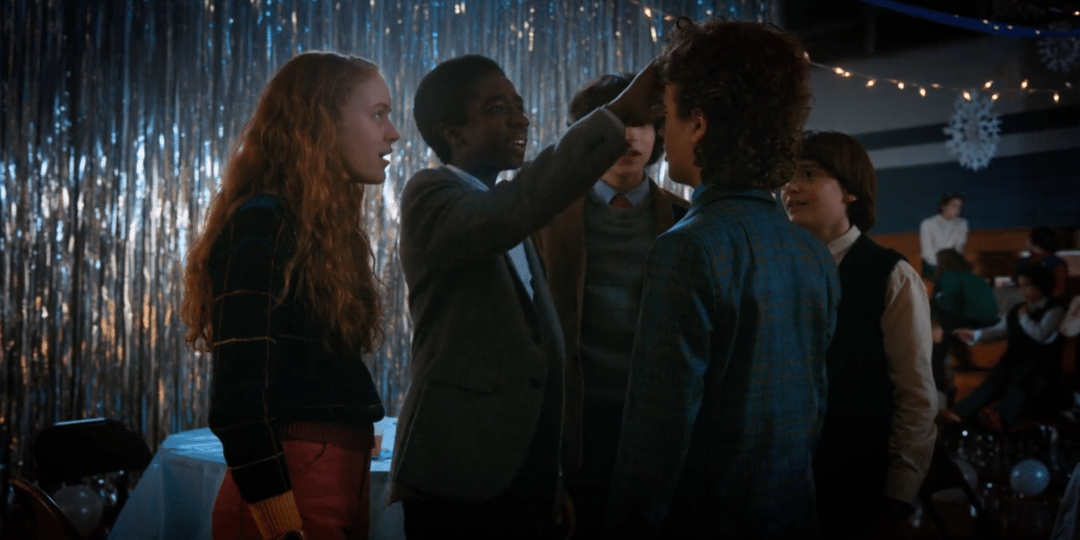 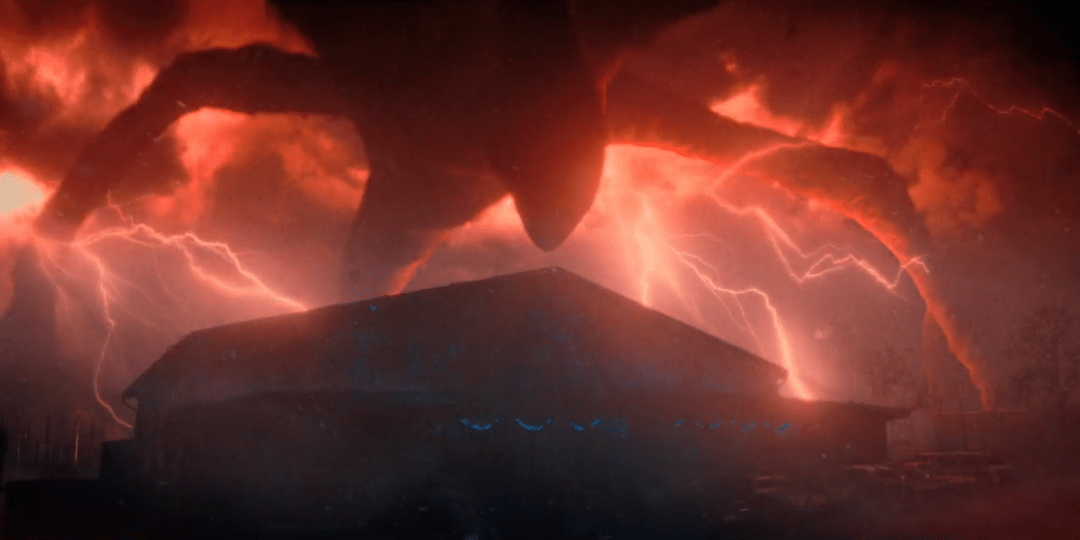 El gets all her reunions

El is staring at Dustin’s teeth. Dustin is flattered someone cares his teeth grew in him. Max introduces herself nicely, but El snubs her and embraces Joyce. El then visits the sedated Will, whom she already knows is sick. She sees the “” and knows it’s in reference to the gate she opened last season. Joyce asks her to close it.

The camera cuts to dozens of Demo-dogs, pawing the ground inside the tunnels and screeching. Closing the gate is not going to be easy.

Mike and Nancy’s mother is enjoying a nice, candlelit bath when she is interrupted by Billy. She falls for his charm (I thought he was a repulsive, violent loser, but hey, Mrs. Wheeler is creepily into it). He’s looking for his , Max. Why hasn’t this guy eaten by a Demo-dog yet?

El claims she can close the gate, but that still leaves a messy problem. Killing the mind flayer’s (aka shadow monster’s) army by cutting off communication is great, but Will is one of the mind flayer’s troops. Joyce remembers the mind flayer likes it and decides they have to make him so a host to the creature that it leaves. She suggests they turn up the heat on Will until it departs.

Hopper and El have a reunion

Steve and Nancy have some time alone, and Steve is so kind and nice that Nancy is clearly left wondering if she made the right choice in dumping him for Jonathan.

Hopper and El take Hopper’s truck, while Nancy and Jonathan take Jonathan’s car. Hopper asks where El went, and she says she went to see Mama. He lied to her that she was dead, but he breezes right past that and gets mad that she hitchhiked. She apologetically says she shouldn’t have left but he backtracks and says it’s his fault and he shouldn’t have lied about her mom.

Hopper mentions his dead daughter, Sarah. This comes as a surprise to El. Hopper must have been repressing a lot to have never mentioned his daughter to El for a whole year. Be that as it may, he finally opens up and apologizes, willing to be vulnerable for once. He compliments her makeover too, in a backhanded way, but you know. Baby steps.

Dustin makes Steve shove the dead Demo-dog into the freezer. That’s disgusting. But Dustin demands it in the name of science, and Steve is easily persuaded. He likes Dustin. They muscle it in and slam the door. Gross.

Mike and the others are dissatisfied doing nothing and devise a plan to set the tunnels on fire, creating a diversion so El can get to the gate unopposed. Steve gives that plan an emphatic no. right then Billy rolls up. Steve walks out to confront him and keep him from finding Max. Billy pushes Steve down and kicks him. Ouch. He’s significantly bigger than Steve, so that’s really got to hurt.

Billy lets his violent side out

Billy strides into the house, telling Max that she “knows what happens” when she disobeys him: he “breaks things.” He grabs Lucas and pushes him roughly into a shelf as he threatens him. Lucas knees him in the crotch. Haha! Steve pulls him off of Lucas and punches him. Billy is in his element now. He likes the pain and starts beating Steve to death on the floor. Max grabs a syringe filled with sedative and stabs him in the neck. Before he passes out, she threatens him with Steve’s spiked bat and makes him agree to stay away from her and her friends.

Joyce, and Nancy bring Will to Hopper’s cabin in the woods and arrange all their space heaters and the stove around Will’s bed. They tie him down and get started.

Hopper and El arrive at the government facility, which is starting to glow rhythmically in an unearthly yellow. It’s going to look more Upside Down than right side up very soon. They walk towards the entrance.

Steve wakes up in Billy’s car with the others, disoriented and probably with multiple concussions. Dustin says the others wanted to leave him behind (that’s cold, guys. Leave him with the guy who almost killed him? And what, just hope he wakes up first? That’s not a plan, that’s criminal negligence). He sees Max is driving and that they brought a can of gasoline. He tries to get them to stop, but he’s in no condition to force anybody to do anything. So he joins them. He takes command, and they accept his authority now that he’s doing what they want.

Will wakes up, sweating and starts screaming, “It hurts! Let me go!” Joyce sets her resolve and turns up the heat. Literally.

Hopper and El make their way through the halls of the facility. They find an injured Dr. Owens and help him. Hopper ties a tourniquet on Dr. Owens’ leg and asks him to consider helping El live a normal life when this is all over. He gives him a gun and Hopper and El .

Dustin gets sprayed by the same type of pulsing, rotting bloom that hit Hopper in a previous episode. He screams and freaks out, saying, “Some got in my mouth! S***!” He calms down and everyone is annoyed. They find the spot on the tunnels which serves as a hub and begin soaking it with gasoline.

Jonathan doesn’t have the resolve to watch Will suffer through the cure, and tries to get Joyce to turn off the heat. The blackness inside Will becomes visible, shooting up his neck in a branched vein pattern. Will gains super strength and rips off one of his restraints. Joyce tries to hold him down, and he starts choking her.

Important events all happen in a quick succession of cuts:

Dustin gets caught by a vine as the group runs out of the tunnels. Steve smashes it off him, but a Demo-dog has cut off their path. Dustin recognizes his old pet and shushes the others. He walks up to Dart fearlessly. Dart roars in his face, but Dustin doesn’t even flinch. He feeds Dart some Three Musketeers, and Dustin and the gang slip away.

El is making slow but sure progress in closing the gate.

Steve, Lucas, Max, and Mike begin climbing out the tunnel. Dustin and Steve are last, but they’re too late. The Demo-dogs, dozens of them, sprint up to them… and then around them. Mike breathes, “Eleven.” The Demo-dogs have more important work to do. Eleven is threatening the mind flayer’s plan for our dimension, and he doesn’t like it at all.

El focuses her power on the gate. Hopper shoots off the Demo-dogs as the jump onto the hanging elevator. The shadow monster punches a tendril through the gate, reaching toward Eleven. She screams and uses both hands, floating off the floor. The tendril smashes uselessly against her telekinesis like it hit a solid wall. El continues to scream as she pushes it back through the gateway, sealing it. The lights all over Hawkins light up brighter in the overflow of Eleven’s energy blast. The gateway sealed now, Demo-dogs drop lifelessly into the pit all around El.

Hopper hugs El, who seems okay though she’s bleeding from both nostrils. I know that she just saved the world, and I get that, but why is no one worried about her health when every single one of them is worried about Will? Stop hugging her and get her to a doctor or something.

We see a soldier locking up the government facility one month later. The lab is closed down, and the tape Jonathan and Nancy released had the intended effect in getting some measure of justice for Barbara, who died last season.

Hopper walks into a bar (sorry, not the start of a joke) and meets with Dr. Owens, who is still healing from his leg injury. Dr. Owens hands Hopper an officially certified birth certificate reading “Jane Hopper.” Dr. Owens is the man, in more than one sense of the phrase. Owens cautions Hopper to lay low for a year anyway, but Hopper pleads for one night out for his adopted daughter.

it’s time for a Hawkins Middle School Snow Ball, and the camera cuts to Joyce teaching Will to dance. A drawing of Bob with a cape the fridge, labeled, “Bob Newby, Superhero.” Jonathan is filming. We see the rest of our heroes getting ready for the dance. Steve arrives at Dustin’s house and brings Dustin to the dance. They have one of the healthiest relationships in the show, in my opinion. Steve sees Nancy through the door, gets teary-eyed and drives off.

Lucas asks Max to dance, sort of. A non-character asks Will to dance, and though she calls him ‘zombie boy’ he accepts. Dustin asks other non-characters to dance, but no one will. Nancy sees him and gives him a pity dance. She’s a chaperone, I think, so it seems inappropriate. Dustin is grateful though.

Joyce and Hopper sit outside, smoking. She leans against him, and he holds her.

Will sits alone, waiting for El. She comes in and he asks her to dance, though neither of them how. They kiss briefly.

The camera cuts to outside the school and ominously starts tilting, slowly enough that you realize what’s happening: we’re going Upside Down. As we flip into the evil unearthly world, we see the rotten Upside Down version of the school.

Red lightning flashes lightly and then heavily over the whole scene, revealing the giant, intact and malevolent mind flayer leaning its monstrous head down toward the school.